I saw its promos.

Ms. Shahane is famous for her smile. She in fact is the pioneer of its Indian-TV version. Remember 'Surabhi', the program she co-hosted on Doordarshan?

Today Ms. Shahane promotes positive thinking. She feels it is panacea. Whatever is your problem, she has the answer: "Be Positive".

The other day I briefly saw Archana Joglekar (अर्चना जोगळेकर) on Marathi TV. She too was talking about the power of positive thinking. She asked viewers to embrace 'positivity'.

I bet if you watch Marathi TV everyday, you will get a large dose of positive thinking, kind of Jamalgota for your mental constipation.

I wish both the fine ladies read either 'Bright-sided /How the Relentless Promotion of Positive Thinking Has Undermined America' by Barbara Ehrenreich or Lucy Ellmann's review of it:

...The pitiless message to the powerless from all these motivational speakers, megachurch preachers, self-help gurus and other assorted selfishness-sellers is that sad sacks get what they deserve.

Promoting the idea that happiness is within your grasp is in the interests of corporations trying to bamboozle an overworked and underpaid workforce...

...Informing the uneducated and unmedicated that their plight is all their own fault is followed up by instructions for making anything you desire – from a new TV screen to a trip to Mexico – "materialise" through mind control. The censorship of negative opinion combines perfectly with the American policy of each man for himself in the best of all possible worlds.

This is the philosophy that gave us the smart bomb, the space programme, sub-prime mortgages, plenty of psychopaths and Sarah Palin. Every dumb American idea we've all had to stomach and die for can be attributed to this devotion to fantasy and self-satisfaction...

...Americans aren't happy, they're just trained to look as if they are. It's fake orgasm on a grand scale, and we're almost deafened by the din..." (The Guardian, Saturday 9 January 2010)

During the interview in February 2010, Ms. Joglekar talked about how her mother- Asha Joglekar, a classical dancer herself,- once completely ignored whatever Archana and her students were doing in class and instead immersed herself in a book on/by Mirabai.

Wise choice. I am sure junior Ms. Joglekar didn't mind the snub because of her 'positivity'.

But the message I got from senior Ms. Joglekar: Mirabai helps even in dance. 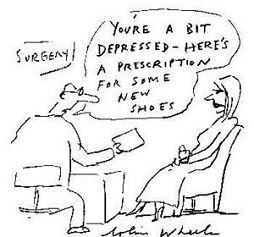