"TO UNDERSTAND HOW economies work and how we can manage them and prosper, we must pay attention to the thought patterns that animate people’s ideas and feelings, their animal spirits. We will never really understand important economic events unless we confront the fact that their causes are largely mental in nature. \

It is unfortunate that most economists and business writers apparently do not seem to appreciate this and thus often fall back on the most tortured and artificial interpretations of economic events. They assume that variations in individual feelings, impressions, and passions do not matter in the aggregate and that economic events are driven by inscrutable technical factors or erratic government action. In fact, as we shall discover in this book, the origins of these events are quite familiar and are found in our own everyday thinking..." ('Animal Spirits: How Human Psychology Drives the Economy, and Why It Matters for Global Capitalism')

Harsh Goenka, the chairman, RPG Group, writes in The Times of India April 29 2010:

"IPL Franchise: High on hype, low on returns...As the dotcom bust has shown us in the past, a manic obsession with valuation is dangerous. IPL is an innovation that deserves every bit of the applause it’s getting from the people of India. It is indeed a product of New India. But greed, and short-term profit motives are hazardous in any business. And cricket is no exception."

"...When the likes of Mukesh Ambani and Vijay Mallya forked out in excess of $111 million (Rs 500 crore) for the Mumbai and Bangalore teams, respectively, what were they getting in return? At the time, IPL was an untested model. Franchisees were essentially buying the branding and participation licences for teams based in their city, with a promise of profitability sometime in the future...But whichever way you look at it, apart from UB group no other corporate owner is extracting significant branding. Reliance is not the face of Mumbai Indians..."

Like a business school case study, Mr. Goenka gives us tables and worksheets to work with. Even a dreaded DCF makes an appearance.

But has Mr. Goenka slotted in his worksheet the joy of Ms.Ambani captured in the picture below? 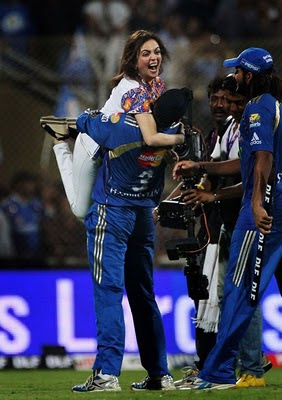 Nita Ambani celebrates as she is lifted by Harbhajan Singh of the Mumbai Indians after defeating the Challengers during the 2010 DLF Indian Premier League T20 semi final match between Mumbai Indians and Royal Challengers Bangalore played at DY Patil Stadium on April 21, 2010 in Navi Mumbai, India.

courtesy: Getty Images
Posted by Aniruddha G. Kulkarni at 9:00 AM No comments: