Pouring Technical Knowledge of the Western World Over Bhopal!

"...Beckert insists that many of the myths we tell ourselves about capitalism—how it functions best when government gets out of the way, how it broke clean from slavery—are as false today as they were during its 500-year history. In Beckert’s account, not only does slavery play a pivotal role in capitalism’s rise, but so does the state. Governments supplied the guns, built the roads, enacted the tariffs, and regulated the markets that made, and continue to make, capitalism thrive.
Beckert, a recently tenured history professor at Harvard, has also decided to bring back the elite. But they’re cast, now, in a far harsher light. Constantly hovering at the margins are the millions of people who they exploited to make their fortunes—to make, in other words, the capitalist world we live in today..."

"...On the night of December 2, 1984, forty tons of methyl isocyanate (MIC), a substance more lethal than phosgene (used as a poison gas in the First World War), and other unknown gases burst out of a storage tank in a pesticide factory owned by the Union Carbide Corporation in Bhopal, India. The shimmering MIC fog, heavier than air, descended on fifteen square miles of the densely populated city, smothering the slums near the factory. People woke up coughing, choking, and blinded, and ran for air only to collapse on the streets. Days later, reporters found cranes removing corpses by the truckload, hordes of children with red teary eyes searching for family members, and gas victims still streaming into the local hospital.
MIC is so lethal that few scientists had dared to test its properties—even a whiff escaping from a test tube can kill. There is no known antidote...

Rajiv Gandhi effectively sacrificed the Bhopal survivors in order to signal that India was open for business, no matter the cost to ordinary people. The settlement was insufficient to provide life-long medical care (conservatively estimated at $600 million) for the more than half million Bhopalis who had filed injury claims, let alone to compensate those who had lost relatives..."

I still remember those couple of days in December 1984 very vividly. I had just joined a petrochemical company.

Recently when I saw the following picture, it looked so creepy. It was as if it was not an ad but a caricature: a  giant hand pouring MIC over Bhopal. 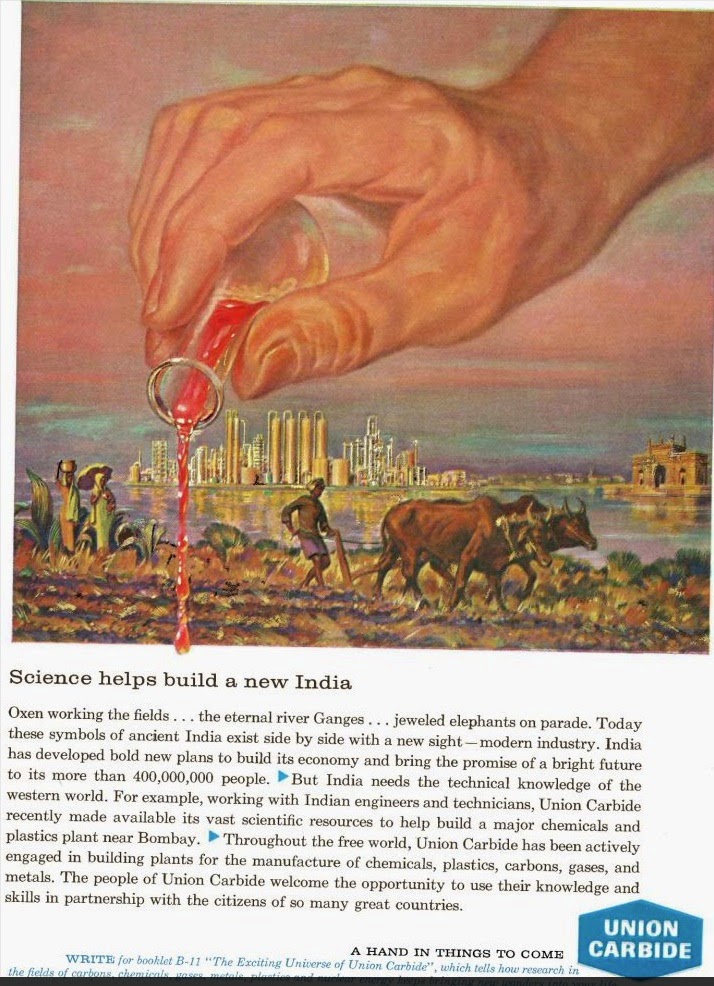 courtesy: Scientific American and copyright holder of the advertisement
Posted by Aniruddha G. Kulkarni at 9:00 AM No comments: