Have Signposts of the World Changed? Paul Theroux and Maurice Isserman Think So.

My favourite book “The Great Railway Bazaar” has been rewritten.

“…Thirty-three years and 40-odd books later, Theroux — ‘twice as old as the person who had ridden those trains’ — set off again, travelling in his own footsteps to see how much he and the world had changed…

Theroux’s idea, as before, is to cross eastern Europe, India and Asia, but he faces deviations from the original route. When he last passed through Iran, portraits of the Shah 15 times life-size dominated station walls; now he is refused a visa. Afghanistan is a no-go area. Sri Lanka’s Tamil Tigers create difficulties. Plane-hops and buses are unavoidable…

The world has boiled and resettled since that first journey. The Soviet Union has collapsed, China risen. India is IT- affluent and optimistic, but the population explosion defeats Theroux: just too many people. He flees. ”

Paul Theroux’s verdict: ‘Only the old can really see how badly the world is aging and all that we’ve lost.’

Maurice Isserman (NYT, August 10, 2008) informs how much we have lost. Reading it was devastating.

“WILCO VAN ROOIJEN, a Dutch mountain climber, managed to survive the debacle this week that took the lives of 11 others in Pakistan on K2, the world’s second-highest peak. Describing the chaotic events that ensued when a pinnacle of ice collapsed and swept away fixed ropes that climbers from several expeditions high on the mountain had counted on to aid their descent from the summit, Mr. van Rooijen lamented: “Everybody was fighting for himself, and I still do not understand why everybody were leaving each other.”

Himalayan mountaineering is an inherently dangerous pastime, and climbers are always at risk from the unexpected. But mountaineering has become more dangerous in recent decades as the traditional expeditionary culture of the early- and mid-20th century, which had emphasized mutual responsibility and common endeavor, gave way to an ethos stressing individualism and self-preservation.
The contrast between the two eras is vividly illustrated by the experience of an earlier expedition that ran into peril on K2… 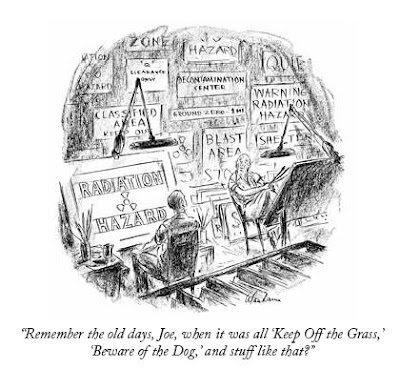 Artist: Alan Dunn The New Yorker 15 June 1957
Posted by Aniruddha G. Kulkarni at 9:00 AM No comments: Links to this post