Death of Dreams: Of Arthur Miller's Salesman and G A Kulkarni's Madhukaka

“………But, like other self-help gurus, Smiles probably affected behaviour less than self-perceptions. He set out to tell people that morality and hard work were needed for success. What his readers took from his writing was the reassuring notion that their success must have been the result of morality and hard work” (April 22 2004)

What vexed Miller were the stories Americans have told themselves about the power of positive thinking, the instant money and spiritual purity that are sure to follow from unfettered entrepreneurship, the decency of the profit motive, the goodness of the national past, and, when all else fails, the possibility of escape and reinvention in the West. This land is your land: Henry David Thoreau crosses uneasily with Norman Rockwell; the tenets of Ayn Rand crash into the gospel of Jesus Christ; the Book of Mormon reads strangely in parallel with the Bill of Rights; Huckleberry Finn lights out for the territory but never becomes the Marlboro Man, exactly. Above all, Miller responded to a culture that cherished a sanctimonious and noxiously sentimental vision of family life as a beacon of health and wealth.

The most famous suicide in American theater is that of Willy Loman, in Death of a Salesman (1949). Exhausted by years on the road, his mind going, Willy is suitably beaten down by heartless business forces, so that his killing himself is at once supremely pitiable and supremely noble: He fakes a car accident so his widow and sons can collect the $20,000 insurance payout. Willy's wife admonishes her sons, who despise their father's doddering and weakness and failure, "But he's a human being, and a terrible thing is happening to him. So attention must be paid." Miller's attention is fixed on larger concerns than the fate of one man. For him, the universal tragedy of American life is the fundamental capitalist insistence that business is business. That's exactly what Willy's boss says as he's firing him; Willy agrees reflexively, but then goes on to qualify and plead. The truth is incontestable nevertheless: If you can't make a killing you get murdered.

Although my father (and my mother) struggled more than Willy, from Arthur Miller's 'Death of a Salesman' 1949, to support us, unlike Elia Kazan, the play’s first director, Willy was NOT our father in one important aspect.

Selling was an alien profession to us then. You could be a teacher, a doctor, an engineer, a barber, a mason, a carpenter, an electrician, a plumber, a milkman, a shopkeeper, a clerk, an accountant, a maid, a priest, an engine driver, a bus conductor, a soldier, a farmer...but selling...what was that?

"And when I saw that, I realized that selling was the greatest career a man could want. ’Cause what could be more satisfying than to be able to go, at the age of eighty-four, into twenty or thirty different cities, and pick up a phone, and be remembered and loved and helped by so many different people?"

Now, I can't identify my father with this. However, my father then being a young, popular college teacher, I can relate him to "remembered and loved and helped by so many different people".

I can also easily relate to the interplay between Willy and his sons and among the two brothers- Biff and Happy. Tim Lott chooses the play for his 5 best books "on brothers"- love and rivalry among siblings with these words: "Death of a Salesman is more about the relationship between fathers and sons than brothers, but the motif of maimed brother relationships runs in all directions."

It's easier to identify my mother with Linda. She, like Linda in Act Two, could have easily said- and probably did- this to my father: "Why must everyone conquer the world? You're well liked, and the boys love you..."

(BTW-Eerily Willy's act of suicide for the family reminds one of farmers' suicides in India.)

LEE SIEGEL has written a great essay 'Death of a Salesman's Dreams' on the revival of 'Salesman' on Broadway in NYT on May 2 2012.

"Certainly few middle-class people, or at least anyone from any “middle class” that Loman would recognize, are among the audiences attending this production. What was once a middle-class entertainment has become a luxury item. Tickets for the original run, in 1949, cost between $1.80 and $4.80; tickets for the 2012 run range from $111 to $840. After adjusting for inflation, that’s a 10-fold increase, well beyond the reach of today’s putative Willy Lomans."

Isn't this true of even latter-day Hindi plays featuring Naseeruddin Shah? Does Mr. Shah make an effort to stage his plays where they can reach beyond English-NDTV-watching audience?

"Not only have the industries that employed the salespeople, factory workers, middle managers and others in the plentiful, humbler realms of mid-20th-century capitalism begun to dry up, but today’s capitalists no longer share Willy’s belief that he could attain dignity through his work. "

Do young Indians believe that they "could attain dignity through their work"?

"In 1949, Willy’s desperate cry — “the competition is maddening!” — must have chilled theatergoers for whom competition still had a mostly positive connotation. In 2012, a fight to the death for shrinking opportunities in so many realms of life renders the idea of fair competition an anachronism. It is a sign of the times that sitcoms, in which trivial, everyday conflicts are comfortably resolved into neighborly harmony, are giving way to the Darwinian armageddons of reality TV. It is as if the middle class were being forced to watch the gladiatorial spectacle of its own destruction."
In India, haven't nepotism and crony capitalism consumed the concept of fair competition and opportunities?

"Even what’s left of the middle class disdains a middle-class life. Everyone, rich, poor and in between, wants infinite pleasure and fabulous riches."

How true of middle-class Indians...If they have one house, they want one more...They have a car, they want really a big second one...Soon they will send their kids to US, UK, Australia starting Class VIII...

"Mr. Miller’s outrage at a capitalist system he wanted to humanize has become our cynical adaptation to a capitalist system we pride ourselves on knowing how to manipulate. For Mr. Miller, Willy’s middle-class dreams put the system that betrayed them to shame. In our current context, Willy’s dreams of love, dignity and community through modest work make him a deluded loser."
Yes, any one who does not follow their path is a deluded loser. Linda by saying- Why must everyone conquer the world?- is a loser.

"Perhaps there is a simple, unlovely reason “Death of a Salesman” has become such a beloved institution. Instead of humbling its audience through the shock of recognition, the play now confers upon the people who can afford to see it a feeling of superiority — itself a fragile illusion."

Do they watch 'Ekach Pyala' (एकच प्याला) to draw the comfort that they will never turn Sudhakar (सुधाकर) because unlike him they drink only expensive wine and scotch?

Do they watch 'Sakharam Binder' (सखाराम बाइंडर) to conclude that they will never be sexually frustrated or feel castrated like him because they can buy little blue pill? 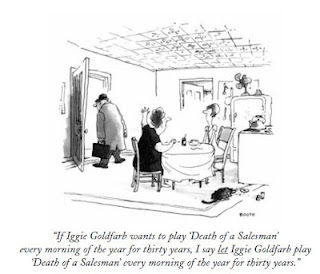 However, on the whole, "Death of a Salesman" endures because, for me, it is more about what happens in a family rather than it's about Willy's dreams.

I had written to G A about how I liked the story 'Ghar' and he replied saying his fans seldom mentioned that story although he had 'soft corner' for it. This is his letter: 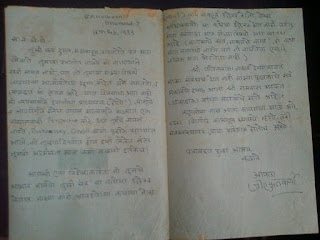 G A Kulkarni letter in Marathi dated 16 Feb 1983- right click to open in another window to magnify and read ( I had compared GA to Marathi saint-poets in my letter to him. I- and GA himself more than me- knew I was exaggerating but now I think it was baloney. No Marathi writer since the death of the last great, Samarth Ramdas समर्थ रामदास in 1681, is any where close to them.)

'Ghar' is the story of middle-class (Brahmin?) Madhukaka (मधुकाका), his wife Mai (माई) and their children Ramesh, Shantaram and Malati.

Now in his retirement, Madhukaka has built a house for the first time in his life and is planning to move into it...housewarming is coming up...he also has plans for his young children...

Will he move into his new house?...Do his children agree with his plans for them?...What happens to his dreams?...Is that family still together at the end of the story?...

The story ends on a sombre note:

(But those blank, white walls started smoothly playacting home around them.)

Epigraph of 'Pingla Vel' is the following quote of August Strindberg:

"Shallow people demand variety – but I have been writing the same story throughout my life, every time trying to cut nearer the aching nerve".

It is no coincidence that G A chose Strindberg who, like a fellow Swede Ingmar Bergman, was a purveyor of domestic hell!

Willy and Madhukaka are great tragic figures but what moves me most is the magnanimousness shown by their wives Linda Loman and Mai(Janaki). They probably never told their husbands how they really felt. 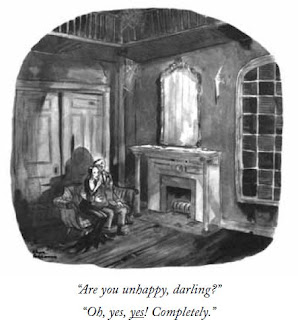 Linda and Mai are my heroes. I see a lot of my mother in them.

It's also no coincidence that I chose a picture by the creator of "The Addams Family" to conclude the post.

"It is worth pausing to contemplate what the Addamses' world is really like, beyond its fantastical and droll qualities. In our ordinary world, we don't routinely inflict physical violence on one another, and of course when we do somebody gets hurt. The reverse is the case for the Addamses. They are always meting out wonderfully horrendous acts of physical mayhem: beckoning unwitting drivers to launch their vehicles into the paths of onrushing moving vans, tying each other to homemade racks, bricking guests up behind walls, larding soups with poison. And yet somehow nobody dies, nobody gets dismembered, nobody writhes in agony, nobody's hair even gets mussed.

In short, the Addamses aim to hurt with delicious malevolence, but the physical damage ends up being invisible or, to put it another way, nonexistent. Emotionally, the dynamic is reversed. The Addamses are loving and caring to one another, convivial and concerned as friends; they wouldn't dream of hurting anyone's feelings..." (WSJ, March 12 2010)
Posted by Aniruddha G. Kulkarni at 9:00 AM No comments: