Indian media- to drive up ratings- inform us every little useless detail about Indian cricketers and their WAGS but thankfully they don’t bother about Shahid Afridi. Therefore, I don't know if he is married or not. When he spoke to Nasser Hussain after the match, he did not bring in his family either. He just spoke about the god, the country, the captain and the team.

Regardless of his marital status, if I were a girl or a gay, I would be falling head over hills in love with Afridi!

When he stood exulting after taking a wicket, see picture below, running his fingers through thick black hair, it looked almost surreal.

In that setting, Bollywood's Big Khans would have looked like sideshows.

This was cricket for the sheer joy of it.

“……It said a great deal for Smith that he did not allow the misfortune to throw him off balance. Bowling more carefully, he delivered the rest of the over to the order. Five balls went down, each of them swinging into the batsman. Three of them Troughton was able to leave alone, as they swung across his body and down the leg side, making Deacon leap and stretch to stop them from going for byes. True, Troughton played carefully, once going right up on his toes to bring the ball down on to the pitch in front of him with the straightest of the bats, dropping his wrists and slackening the fingers round the bat handle.

The seventh, aimed straight at the middle stump had Troughton driving across the line trying to work it away to mid-wicket. It moved off the pitch again, but this time in the other direction, touching the outside edge of the bat as it went and winging its way chest high to Gauvinier at first slip- a straightforward, finger-tingling slip catch.

He flung the ball high in delight- for himself, for Norman, for the ball, for the catch, for the score and for the sheer joy of cricket”

Afridi reminded me of Mohinder ‘Jimmy’ Amarnath of 1983, another carefree cricketer. And not a slave to big money.

David Hopps (Guardian) says: “…To term Pakistan cricket indomitable is not to deny its essentially unstable nature. It is unconquerable only in its passion for the game, but the flames of that passion burn fiercely, bringing delight and recriminations, success and failure. The one constant factor is the fervour…”

When will Indian cricket get back its fervour? 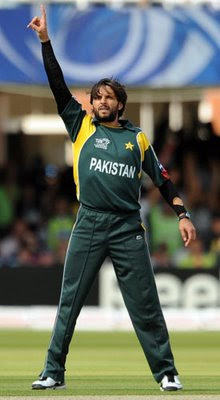 Did Alexander the Great exult like this on the bank of Indus/Sindhu River?