Gautam Rajadhyaksha, A Plastic Surgeon without a Scalpel!

“The most difficult for me is a portrait. You have to try and put your camera between the skin of a person and his shirt”

I always thought many (not all) of his subjects went to him (or invited him) to appear more beautiful than they actually felt they were- he was a kind of 'plastic surgeon without a scalpel' for them - or to make a statement to the world that they had now 'arrived'.

He praised most of his high profile subjects. But when Mr. Rajadhyaksha spoke about the late Nutan (नूतन), it was quite different.

I remember reading his statement that you don't require a 'camera angle' for a face like Nutan's. No 'surgery' required there. What praise! No one, I guess, described Nutan's beauty more poignantly than this.

I also remember him describing the shoot of Rajesh Khanna and Amitabh Bachchan together- when they were supposed to be warring- when all three of them had good fun together.

But looking at Mr. Rajadhyaksha's body of work at the time of his death, I am not sure if he did full justice to his talent.

I have not yet thrown away a few past issues of 'Filmfare' magazine because they feature Mr. Rajadhyaksha's work on his celebrity subjects. Most photo-portraits done by him are hagiographic. And there is not a single image that will haunt me for the rest of my life unlike a couple of images below. They are all glossies in the end. In and out. 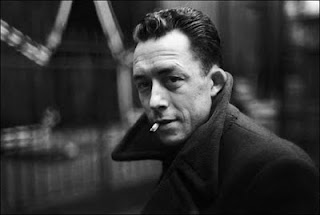 I always thought Mr. Rajadhyaksha's work was commerce first and then art.

I have already quoted Vasant Sarwate writing on Dinanath Dalal:

"...it can be deduced from his writings that despite huge popular and commercial success Dalal wasn't very happy internally...he wanted to pursue only classical art by giving up commercial art entirely...he couldn't quite do it but because of this burning desire his commercial art undoubtedly was touched by class...And it is a great fortune of Marathi literature and art."

Although we too feel fortunate to have enjoyed Mr. Rajadhyaksha's work, did he feel like Mr. Dalal?

Truman Capote once described Mr. Cartier-Bresson who was a big influence on Satyajit Ray as:

"dancing along the pavement like an agitated dragonfly, three Leicas swinging from straps around his neck, a fourth one hugged to his eye: click-click-click (the camera seems a part of his own body) clicking away with joyous intensity . . . "

Mr. Cartier-Bresson photographed artists, writers, politicians, actors, from Matisse and Picasso to Marilyn Monroe; John F Kennedy to Che Guevara; Sartre, Bellow and Pound. Yet many of his photographs have nothing to do with famous people or world events. His gift was to find in everyday situations – a child throwing a ball, a man jumping a puddle – serendipitous visual connections that came together to express something of the experience of being alive. (Liz Jobey, The Guardian)

Did Mr. Rajadhyaksha point his camera at "everyday situations"? Imagine him shooting teeming masses of Mumbai. Would he have left behind a treasure trove like the one by Mr. Cartier-Bresson? 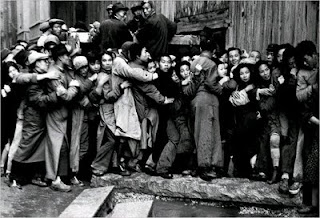 Shanghai, 1948, shows people storming a bank for gold in the days before the Communist forces arrived.
Posted by Aniruddha G. Kulkarni at 1:34 PM No comments: