Measuring Out Life (and Samadhi) with LEGO blocks...

How about LEGO blocks instead of coffee spoons? 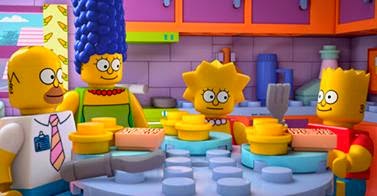 from The Simpsons  'LEGO Spectacular' first aired on May 4 2014

And even possible Samadhi.... 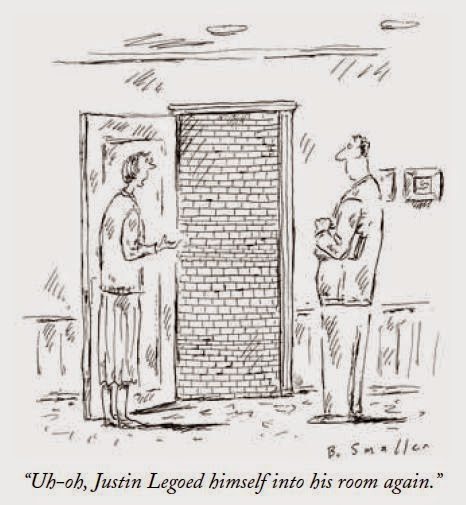 
There I said: "I wish to reproduce two pictures of Mr. Navgire-Tambat courtesy Yale Center for British Art, Paul Mellon collection. These drawings on paper were commissioned by Malet and the British artist James Wales.
How many better drawn Rhinos have you seen? Me none."

One of the pictures is this: 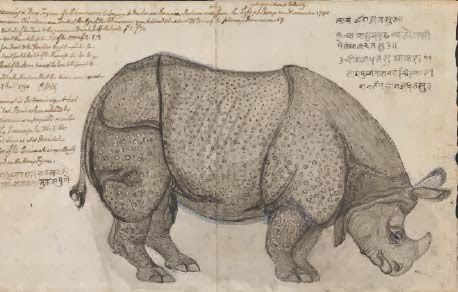 A Rhinoceros in the Peshwa’s Menagerie at Poona, November 1790, watercolor and gouache 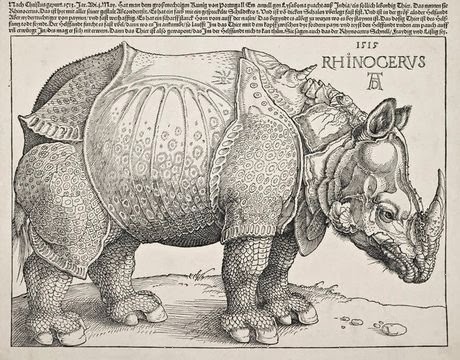 'Albrecht Durer's (1471-1528)  woodcut of a rare and novel beast is a magnificent product of the curious, questioning Renaissance mind.'

Courtesy: The Guardian and The Trustees of the British Museum.

Regardless of whether Mr. Navgire-Tambat has seen the Durer's picture or not, he had seen a real rhino in the collection of Peshwa's.  That was not the case with Pieter Paul Rubens (1577-1640) when he drew a hippopotamus in 1616.

"...Large and aggressive, live hippos were practically impossible to transport in those days. In modern times, the first two hippos arrived in Italy in 1601, when the Italian surgeon Federico Zerenghi brought their skins from Egypt first to Venice, where he had them stuffed, and then to Rome and Naples, where he exhibited them. As luck would have it, Rubens was traveling in Italy at that time, and circumstantial evidence indicates that he probably saw these exhibits with his own eyes. Exotic animals were a prized painterly object, and it is no wonder that Rubens decided to picture this animal in his series of Hunts that he painted for Maximilian I, ruler of Bavaria..." 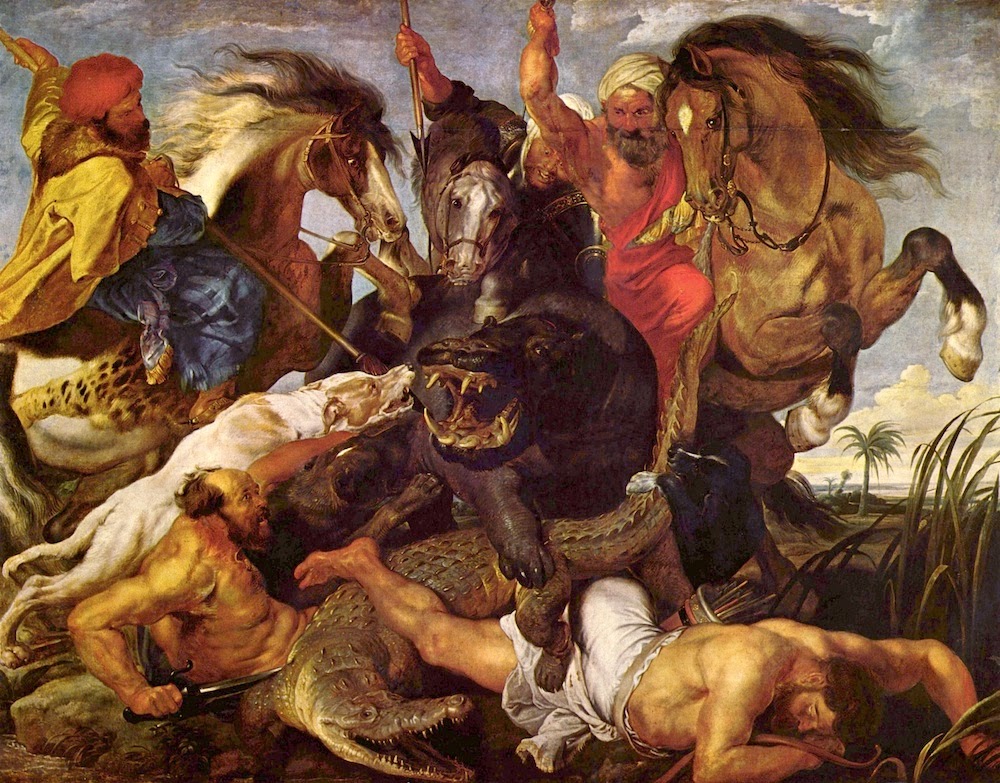 Raj Kapoor was influenced by Buster Keaton, he talks about it in the book-   'Raj Kapoor: Speaks' by Ritu Nanda in the chapter 'Making of Mera Naam Joker'.

(This year I have watched quite a few pre-1950 American films and their influence on Hindi films is far more than I previously imagined. More on that in 2015.) 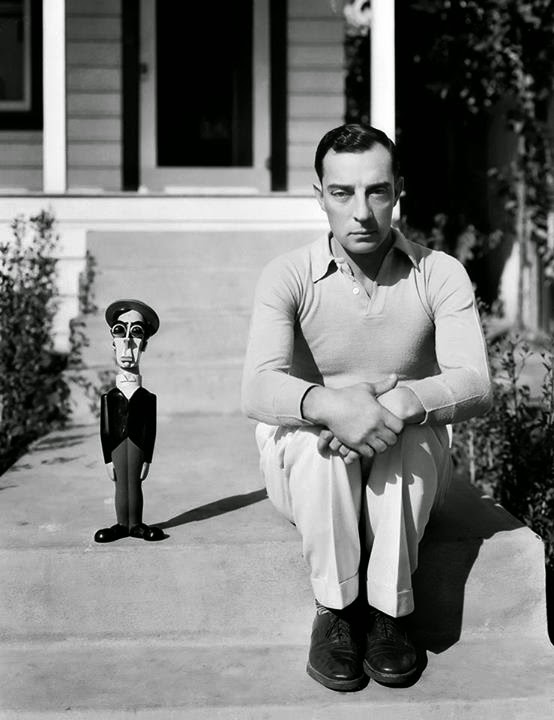 When I saw the picture above, on Facebook, of Buster Keaton along with his doll, I remembered unforgettable song from Mera Naam Joker, 1970: 'Jane Kahan Gaye Woh Din' (singer: Mukesh, Lyricist: Hasrat Jaipuri Music: Shankar Jaikishan)

That song alone demonstrates how talented Mr. Kapoor was, although I have always felt that the talent was not always harnessed fully cinematically. 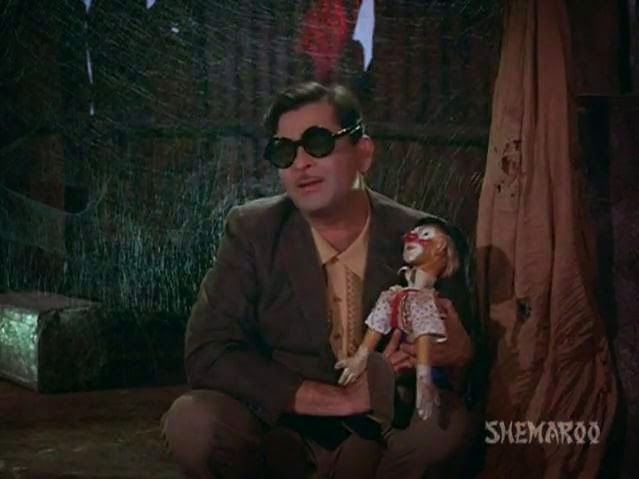 courtesy: Shemaroo and the current owner of the copyright to the feature
Posted by Aniruddha G. Kulkarni at 9:00 AM No comments:

The following is the 50th cover designed and created by Vasant Sarwate ( वसंत सरवटे) for Marathi magazine Lalit (ललित). 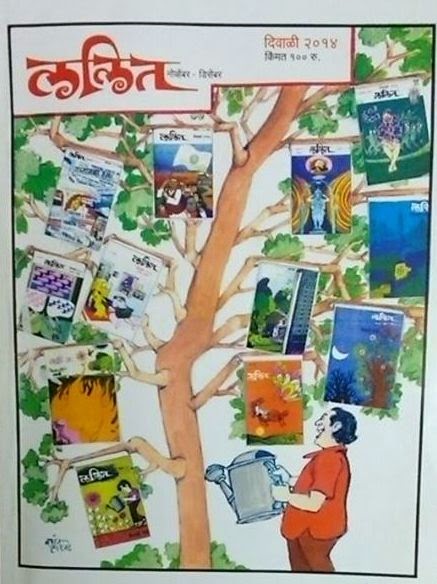 Third row from the bottom, two covers on the left,  belong to Diwali   2007 and 2009 about which I have already written in the respective years.

The one on the bottom left is dated Diwali 1964.   Not just the plant has grown into a solid looking (guava?) tree but  even the kid has grown into a nattily dressed middle-aged man - no doubt feeling little proud- who is still smiling.

Today Sarwate himself is in autumn of his life but listen carefully, and you can hear his life force gushing through the tree of Lalit, 'वसंत वृक्ष'. 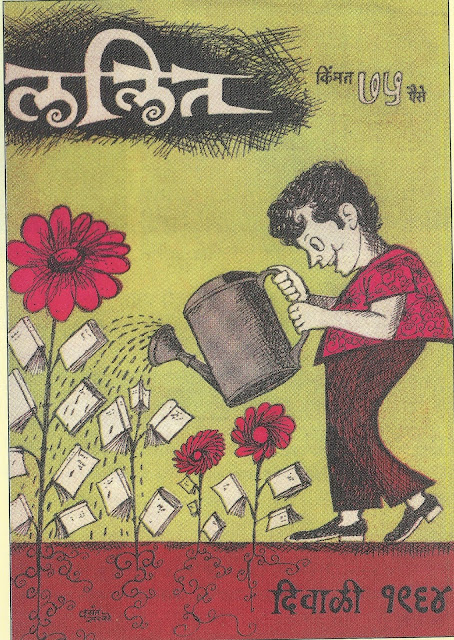 If you wish to enjoy a few of the past covers of Lalit done by Sarwate, please visit the given links. 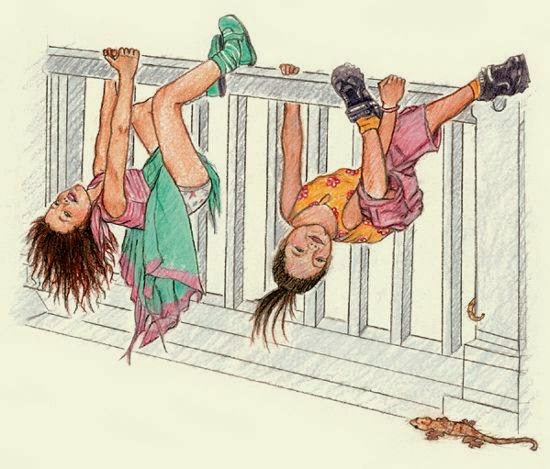 "Down the block where Stieren meets Guenther, a father trimmed a lantana bush, his two girls hanging upside down from the porch rail like possums."

"...Widow. The bitter spider sits
And sits in the center of her loveless spokes.
Death is the dress she wears, her hat and collar.
The moth-face of her husband, moon white and ill,
Circles her like a prey she'd love to kill..."

"...(Rebecca) West was a feminist before the word had gained wide usage, but as a daughter of late Victorian and Edwardian England, she was a feminist with an asterisk. She “wrote angrily about the necessity of better working conditions for women,” yet “more than once she remarked to friends that there was nothing as sad and lonely as the lot of a woman who did not have a man.”..."

"I never commented on the Ms. Desai's art either on my blog or here because I never liked what she wrote. (Not that I have a read a lot written by her but whatever little I did.)

But I liked her as a person.

She and our family went back a long way. We lived just 100 meters from her house in Miraj (मिरज). She and my father were colleagues at a Bhiwandi (भिवंडी) college and at one point we would have classified her as our good 'family friend'.

She came to our house a few times in Miraj and I still remember a very pleasant evening our family spent on the terrace of Ms. Desai's house at Miraj.

I think her sister and very old mother (?) too were around. As a kid I liked her because she came across as funny.

My father, she and another of their colleague saw a performance of celebrated Marathi play 'Natsamrat' (नटसम्राट) in Mumbai, soon after its launch, around 1970 (?). My father later told me the kind of commentary she was doing while watching the play. She called my father 'GD'. She said something like this: "what are you watching so seriously GD? This all is xxxxxxxx!"

I know some of the family feuds she had to suffer. Various writers on her have alluded to them on the blog already referred to. In fact, I know a lot of gory details because once she came to our house and met my mother after an 'incident'...Very unpleasant. Almost unbelievable. But I won't recount them here.

I tried to meet her in Pune when Sadhana (साधना) award was bestowed on her. Just after the function, I touched her feet and tried to make small conversation. But she was lost somewhere. I realised I was unable to take the relationship forward.

I lost all the interest in her literature after reading Vilas Sarang's (विलास सारंग) criticism of her work (by the way, my father too never spoke about her writing but often spoke about her witticism), ('मराठी नवकादंबरी', 1983, 'अक्षरांचा श्रम केला', 2000). When you love Sarang's literary-critical writing, as I do, that is the price you pay. Now, there was no motivation to make even an attempt to read her work.

Today, I don't possess a single book written by Desai-bai. But I remember her as a very pleasant, funny personality."

I looked at the following picture in January 2014. Apart from realizing that my own batting stance was better than that, I thought of Desai-bai and wondered if she ever held a cricket bat in her hand.

Or wear an actual hat? I never saw her wearing any. 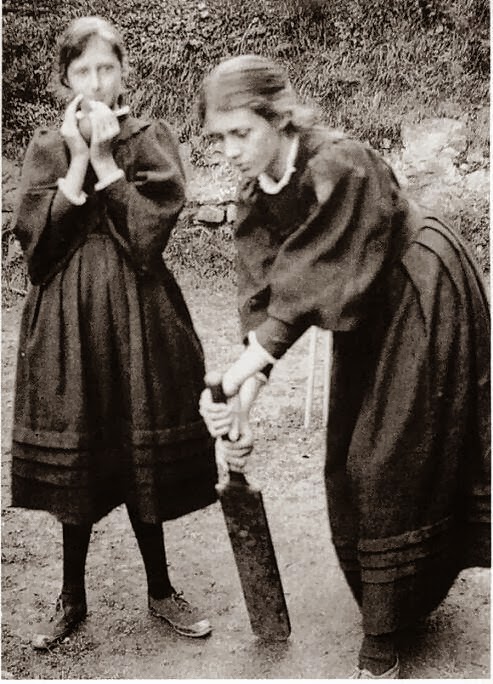 Photo-artist: Not known to me; Year: Unknown to me

"...Over many a race the sun’s bright net was spread


And loosed their pearls nor left them even a thread.


This dire world delights us, though all sup –


All whom she mothers – from one mortal cup.


Choose from two ills: which rather in the main

To perish or to live in pain?

Weather patterns are certainly changing across India. I don't know how they will look in the long run but one senses the big change alright.

In one of the best pieces of humour I have heard, he once said that his joint started acting up even when he heard  Marathi song "Nabh Meghani Akramile" (नभ मेघांनी आक्रमिले), sung by Prabhakar Karekar (प्रभाकर कारेकर), from one of the most popular Marathi plays- 'Sangit Saubhadra' (संगीत सौभद्र), 1882 by Annasaheb Kirloskar (अण्णासाहेब किर्लोस्कर).

'Nabh Meghani Akramile' translates as 'the sky is invaded by clouds'.

When I heard the joke first time, I realised what  funny head the late Mr. Deshpande carried.

I often remember Pu La for something or the other. I don't own most of his books. I mayn't have read his book for a very long time now but he remains an integral part of my ecosystem.

I remember in one of his TV interviews, in a kind of response to his wife's autobiographical, rather grim, book ('Aahe Manohar Tari' आहे मनोहर तरी), not one of my favorites, he said : "मला उदास-बिदास  काही वाटत नाही… " (I don't feel depressed etc.)

It was funny but said with such conviction, I felt it deep inside me and has stayed there since then. I feel he never took himself seriously, an attribute most middle-class Maharashtrians seriously lack. Most of them, especially from  the writing/talking community, are full of themselves.

Let me now return to the invasion of clouds and arthritis.

"The Wolff family of Paramus, N.J., was eyeing the gathering clouds and debating whether to cancel a planned park trip when 6-year-old Leora piped up with an idea: "Let's call Grandma. Her knees always know when it's going to rain!"

Leora's grandmother, Esther Polatsek, says she started being sensitive to the weather in her 20s, when a fracture in her foot would ache whenever a snowstorm approached. Now 66 and plagued by rheumatoid arthritis, Mrs. Polatsek says she suffers flare-ups whenever the weather is about to change..."

I recently bought my favorite book of PLD:  "Nasti Uthathev" (नस्ती उठाठेव), first published in 1952. ["tyache vyavachhedak lakshan" (त्याचे व्यवच्छेदक लक्षण), an essay in there, is one of the best pieces of comic writing I have ever read]

The cover is by Vasant Sarwate (वसंत सरवटे). The subject of the picture is 'Majhi Path Dharate" (माझी पाठ धरते)-  my back sprains! 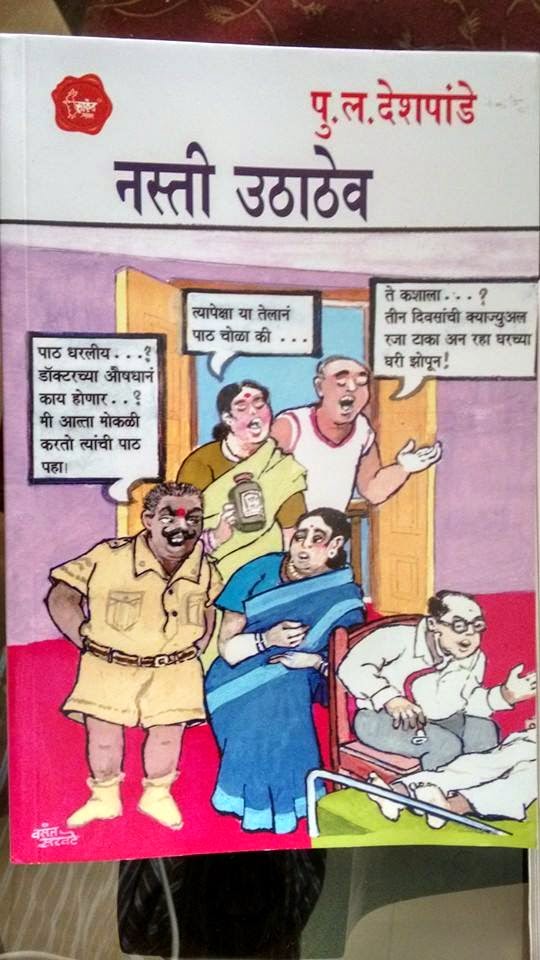 “A century ago, well before Jurassic Park or The Land Before Time or even plain old moribund Godzilla, cinema’s preeminent dinosaur was Gertie, a colorless, potentially narcoleptic herbivore, species indeterminate, fond of dancing and casting elephants into the sea. Gertie the Dinosaur (1914) was one of the first animated films; it pioneered key-frame animation, a technique in which a story’s major positions were drawn first and the intervening frames were filled in afterward…” 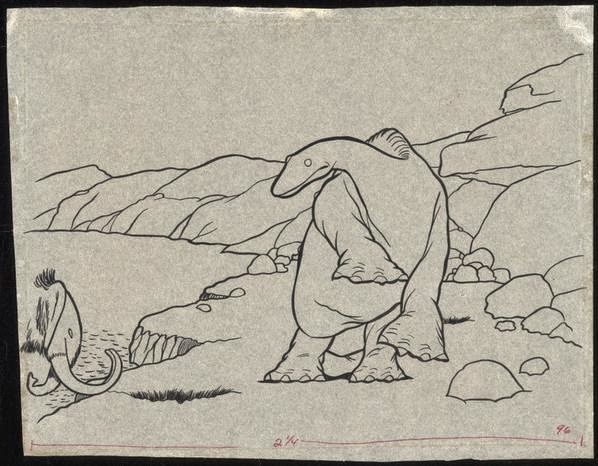