...Hatred of Hindus Was the Default Position of Many Influential People in Britain

"In India in the eighteenth century, before evangelical missionaries and politicians began to demonize Hindu culture, there was considerable fraternization and inter-marriage."


“...The last emperor was also known to his familiars as Zafar - the pen name he used when writing poetry - a word which means "victory" and which could scarcely have been less appropriate, given that it was attached to one of history's great losers. For he died five years after the mutiny, in faraway Burma, a frail 87-year-old who was spoon-fed on broth by the handful of family and retainers he had been allowed to take with him into exile. He had been banished not so much for what he did during the mutiny as for what he represented to the mutineers - Hindus as well as Muslims - who regarded him as the touchstone of an old and deeply rooted way of life which the Victorian Evangelicals, who dominated the making and execution of British policy, were determined to replace with the prejudices and habits of muscular Christianity. To them it was vital that Zafar should be put down, precisely because, having a Hindu mother, he appealed to both sides of India's own great religious division....”


“...Many historians blithely use the word ‘colonialism’ as if it has some kind of clearly locatable meaning, yet it is increasingly apparent that at this period there were multiple modes and very distinct phases of colonialism; there were also many very different ways of inhabiting, performing and transgressing the still fluid notion of Britishness. It was not the British per se, so much as specific groups with a specific imperial agenda – namely the Evangelicals and Utilitarians – who ushered in the most obnoxious phase of colonialism, a change which adversely affected the White Mughals as much as it did the Great Mughals....”


“...As far as the Indian participants were concerned, the Uprising was overwhelmingly expressed as a war of religion, and looked upon as a defensive action against the rapid inroads missionaries and Christianity were making in India, as well as a more generalised fight for freedom from foreign domination. The Great Mutiny has usually been presented by the Marxist historians of the 1960s and 1970s primarily as a rising against British social and economic policies, as both urban revolution and a peasants’ revolts parked off by loss of land rights and employment opportunities as much as anything else. All this certainly played a part. Yet when the Indian participants of the Uprising articulate the reason for their revolt – as they do with great frequency and at some length in the Mutiny Papers – they invariably state that they were above all resisting a move by the Company to impose Christianity and Christian laws on India – something many Evangelical Englishmen were indeed contemplating...”


Jon Wilson, 'India Conquered: Britain's Raj and the Chaos of Empire‘, 2016:
“...British officers thought the concern about animal fat was ridiculous. But Indian fears reflected an accurate understanding of British desires, if not the practical realities of Company rule. Take religion, for example. Among Britons in India, evangelical Christianity was on the rise in the 1840s and 1850s. Most British officers probably did think India’s Muslims and Hindus were infidels who would suffer eternal damnation if they did not convert. Proselytizing pamphlets had been circulated with greater frequency, even in cantonments. European religion and the British government seemed to occupy the same space, as the 1830s and 1840s saw new churches built in cantonments, often bringing the centres of British worship and British power within a few yards of each other. The British did talk about subjugating the whole of India to a single, unitary form of power, even if they saw the East India Company as a decidedly secular kind of authority...”


"...Finally, in 1829, the year after Robertston’s intervention, several years after prominent Brahmins had already spoken up against suttee, and at a time when there were many Indians in the legislature and William Bentinck, an evangelical sympathizer, was Governor-General (1828-1835), the desire to justify their continuing paternalistic rule over Indians whom they characterized as savage children led the British to ban suttee altogether, as well as child marriage, with much self-aggrandizing fanfare.

The British law probably facilitated more women’s deaths than it saved, and its main effect was to stigmatize Hinduism as an abomination in Christian eyes.  Suttee is a pornographic image, the torture of a woman by fire, hot in every sense of the word. Relatively few women died that way, in contrast with the hundreds, even thousands who died every day of starvation and malnutrition, but suttee had PR value. Thus the Raj had it both ways, boasting both that it did not interfere with other people’s religions and that it defended human rights. The debate, in both India and Britain, turned what had been an exceptional practice into a symbol of the oppression of all Indian women and the moral bankruptcy of Hinduism. Nor did the 1829 law, or, for that matter, the new legislation enacted by India after its Independence put an end to it; at least forty widows have burned since 1947..."

Mr. Tharoor's book proves how bad the rule was for India.


Mr. Mihir Bose states in the December 2016 issue of History Today how "distrust of Hinduism was rife among Britain’s ruling class".

“...Yet Churchill was not the first to want to destroy Hinduism. For more than 200 years, hatred of Hindus was the default position of many influential people in Britain. The man who set this agenda was James Mill, whose 1817 text book The History of British India, became the most important at Haileybury College, where the civil servants of the East India Company were taught. ‘The Hindus’, Mills wrote, ‘are full of dissimulation and falsehood, the universal concomitants of oppression. The vices of falsehood, indeed they carry to a height almost unexampled among the other races of men.’ As for religion, Mill wrote,  ‘No people … have ever drawn a more  gross and disgusting picture of the universe than what is presented in the writings of the Hindus.’ ...”

"...After the revolt of 1857 there were calls to eradicate Hinduism. The Baptist preacher Charles Spurgeon told a congregation of 25,000 at Crystal Palace that ‘such a religion as the religion of the Hindoo, the Indian government were bound, as in the sight of God, to put down with all the strength of their hand’. And even after the British had left India, Hinduphobia persisted. Francis Tuker, who spent 33 years in the Indian Army, retired as head of Eastern Command in 1950. Writing of independent India, he feared the advance of Communism there: ‘The Iron Curtain … clanks down between Hinduism and all other systems and religions.’ Hindu India was entering a precarious phase, when it might swap its gods for another. ‘Its religion, which is to a great extent superstition and formalism, is breaking down … Communism will fill the void left by the Hindu religion. It seemed to some of us very necessary to place Islam between Russian Communism and Hindusthan.’..." 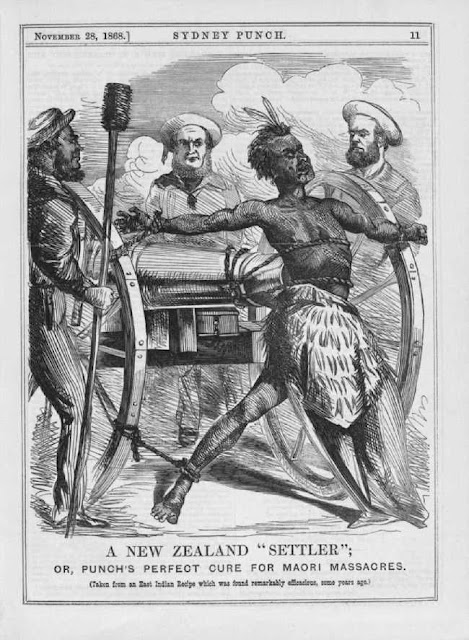 As is well known, many Indians were executed by blowing them from canons. Based on that, the above 'cartoon' appeared in Sydney Punch dated November 1868.

The third line in the caption says: "(Taken from an East Indian Recipe which was found remarkably efficacious, some years ago.)"