In Purdah: Poverty and Pachyderm

"We began questioning the people as to where the elephant had gone and, as usual, failed to get any definite information. That is invariably the case in the East; a story always sounds clear enough at a distance, but the nearer you get to the scene of events the vaguer it becomes."

India's election commission's decision to cover elephant statues in UP ahead of polls drew worldwide attention. Including cartoonists.

Time magazine has a photo essay. 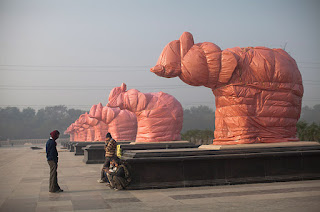 It was fascinating. You can cover a woman. Indeed her statue. But elephants?

Cover no cover, voters voted out the ruling party BSP. 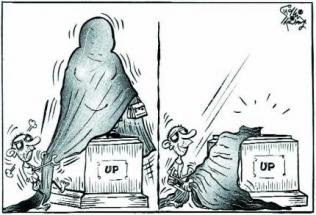 India's planning commission was watching this. It felt: If they did it to elephants and Ms. Mayawati (whose statue is standing on left in the cartoon above), we could do it to poverty.

Indian government is claiming seven-percentage-points reduction in the national incidence of poverty between 2004-05 and 2009-10. Poverty lines on which these estimates are based: a per capita daily consumption expenditure of Rs. 28.35 and Rs. 22.42 in urban and rural areas respectively.

For a family of four the figure is `2,700 a month in rural India, and `3,420 a month in urban India for subsistence survival. Within this amount, India's planners think, they should be able to take care of food, clothing, shelter, health and education! 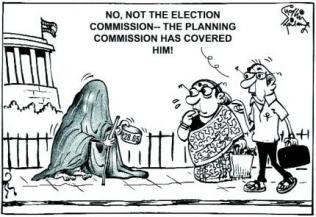 Mr. Tailang could also show how Montek Singh Ahluwalia, current Deputy Chairman of the Planning Commission of India is making the statue of poverty vanish in one single stroke of statistics.

Two pictures, above, of Mr. Tailang prove, once again, how he probably is the best political cartoonist in contemporary India. On the brink of entering the class of past masters like K. Shankar Pillai, Abu Abraham and R K Laxman.
Posted by Aniruddha G. Kulkarni at 9:00 AM No comments: Links to this post