[At the tip of the hand resides (goddess) Laxmi,
At the root (goddess) Saraswati,
At the centre (god) Govinda,
In the morning, catch sight of hand.]

"toilets are more important than temples. No matter how many temples we go to, we are not going to get salvation. We need to give priority to the toilets and cleanliness"

"But things will change only when Indians decide sanitation is not a dirty word; thatno one group of people is destined to clean up after other people; that toilets can be the temples of a modern, just and democratic country."


My father told us that  Vinoba Bhave (विनोबा भावे) used to say “प्रभाते मलदर्शनम” (In the morning, catch sight of your own feces). I thought it was very funny and very profound.

For me,  in 20th century, Vinoba was one of the greatest scholars of religion  in the world. His knowledge of all religions practised- yes including Islam and Christianity- in India was formidable. And his Marathi (मराठी) expression is so simple, beautiful and direct. I seldom read or hear such Marathi written in present times.

But by saying “प्रभाते मलदर्शनम”, was he- like Jairam Ramesh-  being blasphemous? Some religious fundamentalists would say so.


By building toilets, you will not have to sight somebody else's  feces!

Was Vinoba greeted by his creator in heaven like this: 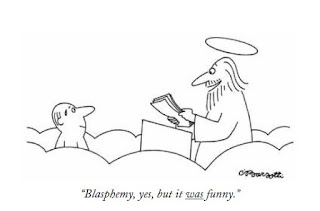 Artist: Charles Barsotti, The New Yorker, 15 November 1993
Posted by Aniruddha G. Kulkarni at 9:00 AM No comments: Links to this post