‘Fictitious Values/ Boom and bust in twenty-first-century lit’, Bookforum, June/July/August 2012:"The banality of money may be a reason writers shy away from quoting dollar amounts. If we can’t escape prices in our daily lives, can’t we at least escape them in novels? Besides the risks of committing an embarrassing inaccuracy and alienating the reader, who may have completely different notions about what constitutes a living wage or a reasonable price for a sandwich, quoting actual numbers dates the work in a way that it didn’t in the relatively inflation-free bullion-backed nineteenth century."

Although it continues to be legal tender, 25-paisa coin (Hindi चवन्नी , Marathi पावली) is no longer accepted at Pune.

I have used 1-paisa, 2-paisa, 3-paisa, 5-paisa, 10-paisa and 20-paisa coins in the past. They all gave me tremendous pleasure because all of them once could buy me some favourite food- candy, peppermint, peanuts, puffed rice, biscuits etc.

Thanks to inflation, they are now dead as dodoes.

The Economist, December 8th 2007 confirmed: "The Economist's food-price index is higher today than at any time since it was created in 1845." (see chart at the bottom of this post).

Inflation kills poor and those who don't own assets.

“…(during the world war II) Massive inflation was the inevitable outcome, something that did not happen in Britain itself. The food price index (1937=100) shot up to 311 by 1949 in India...The data reflect the rationed price of food in India: the black market price was even higher.

Now, inflation is very good for producers and asset owners. All property owners saw property values skyrocket. Rising agricultural prices benefited all landowners, and even small ones got out of debt and bought fresh land. Many new salaried jobs were created by the war, and the problem of the educated unemployed disappeared. Above all, the business class flourished…

…The rural landless in India were the worst hit. They had neither access to the new urban jobs or rationed urban supplies. Ranging from a quarter of the rural population in Bengal to over half in Madras, they bore the brunt of spiralling prices..."

Inflation makes us numb to them.

Here is an example.

(Tanee Maternal-aunt: “..and take this two annas for you, if you feel very hungry during the journey, buy something…”)

G A Kulkarni-sir, two annas won’t buy me anything today and worse, my son doesn’t even understand this currency.

I wonder if we need to print consumer price index of the year against each such reference! 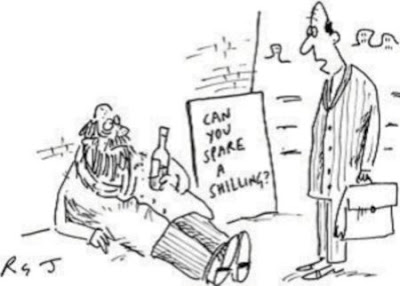 ‘A shilling? How long have you been drunk?’

Posted by Aniruddha G. Kulkarni at 7:30 AM No comments: Links to this post