If Kauravas in Mahabharata had Horse Collars...Ahead of Even Brahmastra

Today April 14 2012 is 50th Death Anniversary of Mokshagundam Visvesvaraya, a technologist, who, above all, served his motherland and still touches lives of millions of ordinary Indians.

"...by the year 1600 Japan had the best guns of any country in the world. And then, over the course of the next century, Japan gradually abandoned guns.

"...The then President A.P.J. Abdul Kalam, whose speech advocating the project was quoted by Ranjit Kumar and Justice Kirpal virtually created the project in 2002. The NDA government saw political advantage in this. Since it was a grand idea, it could go to the electorate saying it would do this. The government engineers hailed the idea because it would be a grand engineering achievement, something big, which they could boast about. Gigantism is one of our obsessions."

Dr. P V Indiresan was the director of IIT, Madras when I was there in early 1980's.

For me, he was a big bore. (btw- I found most teachers at IIT interesting. Some even exciting. A couple of them have already appeared on this blog.)

He used to hold forth on many subjects. If you were a powerful professor at an IIT, it was never very difficult to get nodding audience.

Later in his career, he became a newspaper columnist. I kept meeting him on Business Line Op-ed pages.

He still was a bore. I don't think I read a single article by him in entirety.

But following thoughts by him expressed on April 6, 1998 caught my attention.

"Today, I plan to explore the reasons why India is, and has always been a weak force in international technology. Once we understand why we have been backward, and why we still are backward, we should be on the way to success...

...At the same time, it is proper for us to enquire why we built temple halls with a thousand pillars a millennium after others had mastered the design of the arch. Or, consider why we built the great sundial in Jantar Mantar long after telescopes had become commonplace, and why even today we remain the only manufacturers of vintage cars. When Alexander bore down on us with his swift horses, we stood stuck in the mire with elephants. We learnt no lessons from our defeat at his hands. 1700 years later, we lost again to Babar because, in all those intervening centuries, we had remained loyal to elephants and further had nothing better than muskets to counter Babar's canons. Even in 1962, the Chinese humiliated us because they had modern arms and we had none. Why do we stick to obsolete technology all the time?..."

"A horse collar is a part of a horse harness device used to distribute load around a horse's neck and shoulders when pulling a wagon or plow. The collar often supports and pads a pair of curved metal or wood pieces, called hames, to which the traces of the harness are attached. The collar allows a horse to use its full strength when pulling, essentially allowing the horse to push forward with its hindquarters into the collar rather than to pull with its shoulders as it would be required to do if wearing a yoke or a breastcollar. The collar is also an improvement on the yoke as it reduces pressure on the windpipe." 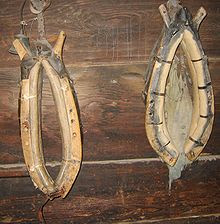 As a kid, I read and re-read Mahabharata and about chariots of its many heroes. Did they use horse collar then?

No and not just then...India did NOT have as simple (but revolutionary) a technology as a horse collar for centuries after it was invented.

Irfan Habib:
"...The collar-harness, which appeared in Europe about the beginning of the tenth century after a much longer history in China, immediately made the horse an efficient draught animal. However, since the horse-collar was not known in India, carts and carriages in Mughal times were pulled almost exclusively by bullocks...When Mughal artists were called upon to depict chariots used by the heroes of the Mahabharata, they faithfully reproduced the yoke of the bullock-cart, thus reveling their total ignorance of the collar-harness....It's therefore certain that the ekka and tonga are post-seventeenth-century innovations; and Mughal India completely lacked these cheap and quick means of passenger conveyance... " 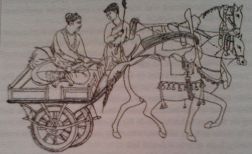 Wikipedia:
"From the time of invention of the horse collar, horses became extremely valuable for agricultural success and for pulling heavy vehicles. When the horse was harnessed with the horse collar, the horse could provide a work effort of 50% more foot-pounds per second because of greater speed than the ox, as well as having generally greater endurance and ability to work more hours in a day. The horse collar was important in the development of Europe, as the replacement of oxen with horses for ploughing boosted the economy, reduced reliance on subsistence farming, and allowed the development of early industry, education, and the arts in the rise of market-based towns."

So it is likely that if only Kauravas had got horse collars and NOT Pandavas, the story of Mahabharata would have been different!

The subject of chariot also brings up Ben-Hur (1959). The music- composed by Miklós Rózsa- during the chariot race- no horse collars even here because they came in Europe c 920 CE- is so haunting.

But have you paused and looked around the cinema where the movie was shown? 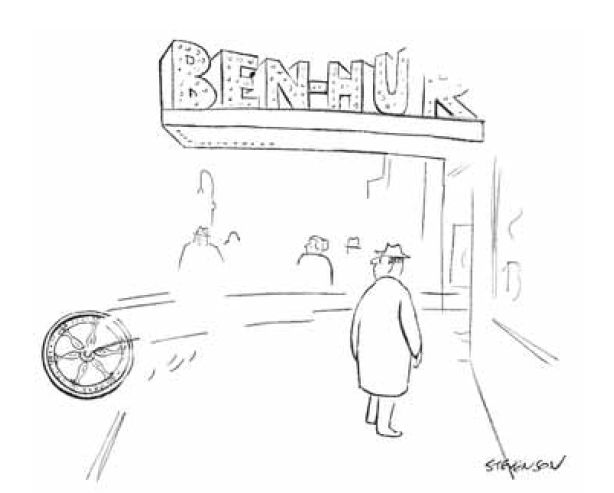 
Mr. Stevenson is as brilliant as they come.
Posted by Aniruddha G. Kulkarni at 9:00 AM 2 comments: Links to this post