“…Sexuality brought Williams down to earth and into life. “What do you expect to get from this sort of life?” Stanley asks Blanche about her promiscuity, in the first version of Streetcar. “Just life,” she says. Sexuality also called all absolutes into question. “The truth of the matter is that all human ideals have been hats too big for the human head,” Williams wrote in his diary in 1942. “Chivalry—democracy—christianity—The Hellenic ideal of Intellectual purity (the one I find most appealing)—all too big a hat!”…”

I feel Marathi stage owes a  debt to Mr. Williams. 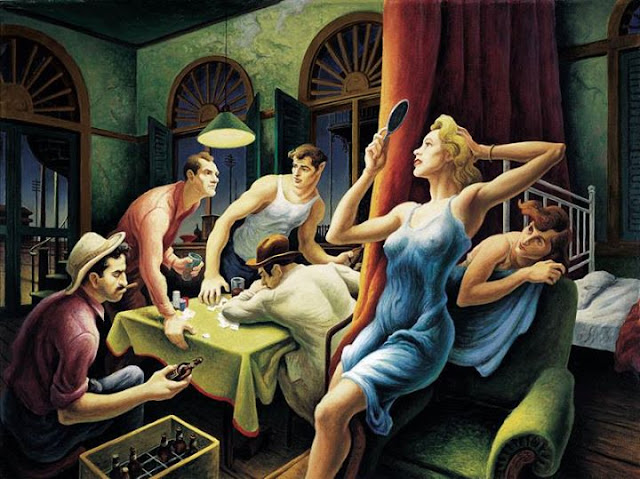 
"Poker Night captures the sexual tension and violent undertones in the relationships between Blanche DuBois, a down-and-out Southern belle (holding up a mirror), her sister, Stella (leaning over the armchair), and Stella’s husband, the hot-tempered, childlike Stanley Kowalski (wearing a white undershirt). It documents one of the play’s most dramatic and memorable moments, when Blanche taunts a drunk and angry Stanley with her petty provocations and refined airs."

This picture makes me wonder why, in India, we don't have paintings capturing a slice of a great play or a movie from 20th century. We have such paintings for Indian mythology drawn by the likes of  Raja Ravi Varma or Bhawanrao Shriniwasrao Pant Pratinidhi or T.V. Subramaniam (Maniam).

For instance staging of 'Samyukta Manapman' (संयुक्त मानापमान) on July 8 1921,  featuring two greats Keshavrao Bhosale (केशवराव भोसले) and Bal Gandharva (बाल गंधर्व),  was one of the greatest events on the cultural map of 20th century Maharashtra. It can only be compared to the rock star concerts in today's era. It's said that if the play were to be performed in open air, the ticket collection could been as much as Rs. 1 lac.

And yet there is no great painting based on that performance!
Posted by Aniruddha G. Kulkarni at 9:00 AM No comments: