André Gide: “Everything that needs to be said has already been said. But since no one was listening, everything must be said again.”

John Barth:"And originality—“making it new”—has many forms. The mainspring of Somadeva’s (सोमदेव) epical eleventh-century Sanskrit tale-cycle, Kátha sarit ságara कथा सरित सागर, or “Ocean of the Streams of Story” (longer than Homer’s Iliad and Odyssey combined), is the goddess Parvati’s request that her consort Siva, as her reward for a particularly divine session of love-making, tell her a story that no one has ever heard before or will ever hear again. In fact, however, the multi-volume “Great Tale” that her lord comes up with includes whole cycles of earlier tales, such as the centuries-old Panchatantra पंचतंत्र (“Five Principles”) and the Vetalapanchavimsati वेतालपञ्चविंशति (“Twenty-five Tales of a Vampire”). And Siva’s tale is overheard by one of the house-servants, who repeats it to his wife, who repeats it to Parvati, who is so incensed by the violation of her for-my-ears-only contract that many consequences follow—including, fortunately, the Great Tale’s transcription and its passage down the ages to us."

I have already written a post on the NCERT cartoon issue.

Cartoonist Sudhir Tailang has been agitated over this. His agitation is understandable because this issue was preceded by Mamata Banerjee cartoon issue.

I have already hailed Mr. Tailang as the best political cartoonist in India today.

And here is another example why.

If you have still not seen Shankar's NCERT cartoon, you can see it here.

Although I on an average see more than a funny picture almost every day, seldom I laugh out loud. Especially when I am alone.

This picture made me laugh really loud when I was alone. I did not expect the artist to go out on this limb.

This is Mr. Tailang's tribute to the late Mr. Shankar. The only major difference between the two pictures is the presence / absence of people of India. For some reason, Mr. Tailang's picture doesn't have them.

I see a design even there.

Politicians were accessible then. Now they aren't.

“I watched Nehru who had been so accessible even after his country became independent, become increasingly isolated, until one day in Amritsar, an old man who only wanted to touch his feet and receive darshan was nearly killed by a lathi and was carried away by the police in mufti. I watched the slow erosion power works on those who enjoy it and slowly, one by one, I lost my old friends in politics. Constructive criticism, at first welcome, soon grew sour compared with the sycophancy of those who had axes to grind and beds to feather. Power corrupts because it isolates and because in the modern world there is no room for the traditional fool of Shakespearian days.”

Therefore you now have no one watching them when they are whipping India's 'snail' economy unlike then when they were creating India's constitution!

Remember, Dr. Manmohan Singh is NOT whipping Mr. Pranab Mukherjee. He is about whip the snail. (Even that looks cruel to me now!) 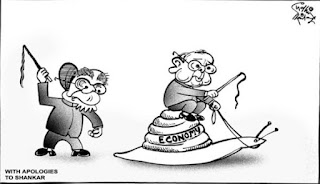 (My Asian Age issue dated May 17 was delivered on May 18. Lucky me, I did NOT miss it! AA is worth most times because of Mr. Tailang's cartoon alone.)