“It is in vain to dream of a wilderness distant from ourselves.”

"We all know that Galileo and Darwin were bad men; Spinoza was thought dreadfully wicked until a hundred years after his death; Descartes went abroad for fear of persecution. Almost all the Renaissance artists were bad men."


"In Italy, for 30 years under the Borgias, they had warfare, terror, murder and bloodshed, but they produced Michelangelo, Leonardo da Vinci and the Renaissance. In Switzerland they had brotherly love, they had 500 years of democracy and peace - and what did that produce? The cuckoo clock."

"The Swiss may have produced more than cuckoo clocks, but it was the creative turbulence of the Renaissance that gave us the murderous modern world"

So what do you want? Creative turbulence of the Renaissance that gave the murderous modern world or brotherly love, peace and democracy but no Michelangelo and  Leonardo da Vinci? Remember, it's a package deal.

Pune edition of Marathi daily May 29 2013 Loksatta (लोकसत्ता)  is all Everest. It's celebrating 60th anniversary of Everest conquest.

I don't grudge it but I wonder why there is no introspection and 'the other side' of it.

Read its leader here and I quote a part of it:

("...there is an Everest on every person's mind. In fact it should be there. Only if it's there, you strive for it. You become restless to scale it and that restlessness becomes the life's objective. That peak could be in sports. In writing. In music. Even in cinema-drama-sculpture or the desire to navigate the sea in a simple sailboat. Whatever it is. But it is essential to have one and living without objective is just a survival. If there exists man's  humanness then it exists in this and such Everest objective...")

This is absolute nonsense, load of rubbish. (I have tackled this theme earlier on the blog. Therefore, I'm likely to repeat myself.)

Who told them every one has to have a lofty objective in life? For most people on the earth, the only affordable objective is 'survival'. And what is wrong with that objective?

Mel Brooks says in a lighter vein : “Nietzsche whispers to you: ‘Without audacity there is no greatness.’ Freud whispers to you: ‘Why must there be greatness?’ That fight’s still going on. And you don’t understand either one, because they’re both whispering in German."

The most important point there: Why must there be greatness?

"...Nearly all the sports practised nowadays are competitive. You play to win, and the game has little meaning unless you do your utmost to win. On the village green, where you pick up sides and no feeling of local patriotism is involved. it is possible to play simply for the fun and exercise: but as soon as the question of prestige arises, as soon as you feel that you and some larger unit will be disgraced if you lose, the most savage combative instincts are aroused. Anyone who has played even in a school football match knows this. At the international level sport is frankly mimic warfare. But the significant thing is not the behaviour of the players but the attitude of the spectators: and, behind the spectators, of the nations who work themselves into furies over these absurd contests, and seriously believe — at any rate for short periods — that running, jumping and kicking a ball are tests of national virtue.
Even a leisurely game like cricket, demanding grace rather than strength, can cause much ill-will, as we saw in the controversy over body-line bowling and over the rough tactics of the Australian team that visited England in 1921..."

What has 'humanness' (माणूसपण) to do with excellence in competitive / commercial sports, music, sculpting, writing etc.? We all know how many of the great artists are/were lousy human beings.

Most acts of humanness in man's history have been carried out by ordinary anonymous men and women and remain unrecorded.

What about climbing Everest itself since 1953?

"...While praising Mr. (George) Mallory as “a man of today” and a “pioneer,” Mr. Geffen conceded that because of those qualities “he wouldn’t go to Everest today — people are crawling all over it.”

"...Since the first ascent on May 29, 1953, by Edmund Hillary and Tenzing Norgay, some 3,836 people have climbed Mount Everest, with almost three quarters of them making the ascent in the last 10 years. The Himalayan peak has become "an amusement park," says top Italian alpinist Simone Moro, who has summited Everest four times...."

"On Everest—where about 350 people reached the summit over two days this spring—Sherpas do virtually all the work, fixing lines to the top and sometimes even attaching the clients' ascenders (a metal device that clamps onto the line) so that they don't have to remove their mitts. There is less hand-holding on K2, but some of the 2008 expeditions employed their high-altitude workers as de facto guides, and all of the expeditions—with the exception of a single climber, Alberto Zerain—depended on ropes fixed by Sherpas. "We climb twice," Chhiring tells the authors. "First, Sherpas go up to set the ropes and camps, then we go down to collect our clients and take them to the top.""


"In the weeks leading up to today’s anniversary, climbers have complained that the mountain has gotten too crowded and commercialized, often with rich, inexperienced tourists looking for a high-prestige vacation. (It’s indicative, perhaps, that one of the most widely circulated videos from the 60th anniversary celebration was essentially a commercial for the Austrian energy drink Red Bull." 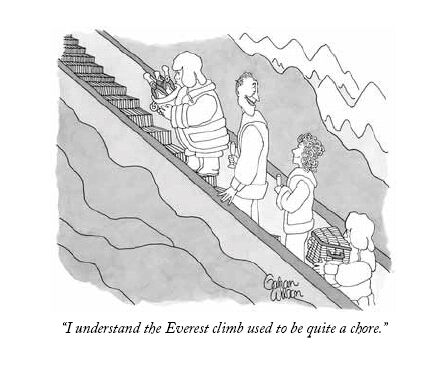 John Gray: "Other animals do not need a purpose in life. A contradiction to itself, the human animal cannot do without one. Can we not think of the aim of life as being simply to see?"

In Satyajit Ray's 'Kanchenjungha', 1962, in the last scene,  the mists at last roll away from the
awesome summit but  the industrialist Indranath Roy (Chhabi Biswas) is so preoccupied.  he no longer cares to admire it.

But when I see the last scene of Ray's  'Kanchenjungha', I am never preoccupied. I just see her. She then occupies me. I scale her and she scales me right back! 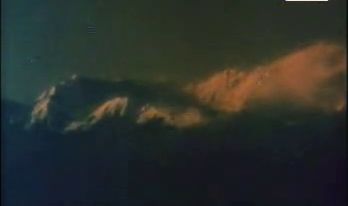 Posted by Aniruddha G. Kulkarni at 12:09 PM 2 comments: Links to this post