Sisyphus Stone is a Cube and Not a Sphere? Extreme Sisyphus!

George Orwell
'Politics vs. Literature — An examination of Gulliver's travels':

"But the most essential thing in Swift is his inability to believe that life — ordinary life on the solid earth, and not some rationalized, deodorized version of it — could be made worth living. Of course, no honest person claims that happiness is now a normal condition among adult human beings; but perhaps it could be made normal, and it is upon this question that all serious political controversy really turns."

"...Progress condemns idleness. The work needed to deliver humanity is vast. Indeed it is limitless, since as one plateau of achievement is reached another looms up. Of course this is only a mirage; but the worst of progress is not that it is an illusion. It is that it is endless.

In Greek myth, Sisyphus struggles to roll a stone to the top of a hill so it will then roll down the other side. Robert Graves tells his story thus:

He has never yet succeeded in doing so. As soon as he has almost reached the summit, he is forced back by the weight of the shameless stone, which bounces to the very bottom once more; where he wearily retrieves it and must begin all over again, though sweat bathes his limbs, and a cloud of dust rises above his head.

For the ancients, unending labour was the mark of a slave. The labours of Sisyphus are a punishment. In working for progress we submit to a labour no less servile..." 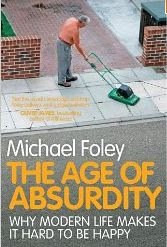 a self-dooming Sisyphus with a power tool?

the cover of 'The Age of Absurdity: Why Modern Life Makes It Hard to Be Happy' by Michael Foley

The latest trigger to publish the post came from GREG SMITH's op-ed in The New York Times "Why I Am Leaving Goldman Sachs" on March 14 2012.

"Goldman Sachs today has become too much about shortcuts and not enough about achievement...Leadership used to be about ideas, setting an example and doing the right thing. Today, if you make enough money for the firm (and are not currently an ax murderer) you will be promoted into a position of influence...I attend derivatives sales meetings where not one single minute is spent asking questions about how we can help clients. It’s purely about how we can make the most possible money off of them. If you were an alien from Mars and sat in on one of these meetings, you would believe that a client’s success or progress was not part of the thought process at all..."

Mr. Smith is mistaken. It's not about shortcuts at all. It's about the journey itself...fundamental nature of our labour.

(By the way, this is what Joe Nelson who left his job as a vice president of Goldman Sachs in December 2011 to start a company that sells condoms in 95 different sizes had to say this about Mr. Smith's op-ed:

"I think it's a little low quality to be honest. My immediate take was that the guy failed to make MD (again) and the bonus/non-bonus cheque cashed 2 weeks ago -- so sour grapes if you like. What a way to go! If the op-ed was signed off 'XYZ, Partner at Gs' I would have taken a lot more notice.”)

This is what Charles Duhigg writes in 'The Power of Habit':

"...If you can identify the right cue and reward—and if you can create a sense of craving—you can establish almost any habit.
“Consumers need some kind of signal that a product is working,” Tracy Sinclair, who was a brand manager for Oral- B and Crest Kids Toothpaste, told me. “We can make toothpaste taste like anything—blueberries, green tea—and as long as it has a cool tingle, people feel like their mouth is clean. The tingling doesn’t make the toothpaste work any better. It just convinces people it’s doing the job.”..."

And after this India's the best and the brightest will continue to join FMCG transnational giants becoming their world oral-care chiefs, located in London and Singapore and New York.

"Yet if one looks closely one sees that there is no essential difference between a beggar's livelihood and that of numberless respectable people. Beggars do not work, it is said; but, then, what is work? A navvy works by swinging a pick. An accountant works by adding up figures. A beggar works by standing out of doors in all weathers and getting varicose veins, chronic bronchitis, etc. It is a trade like any other; quite useless, of course--but, then, many reputable trades are quite useless. And as a social type a beggar compares well with scores of others. He is honest compared with the sellers of most patent medicines, high-minded compared with a Sunday newspaper proprietor, amiable compared with a hire-purchase tout--in short, a parasite, but a fairly harmless parasite. He seldom extracts more than a bare living from the community, and, what should justify him according to our ethical ideas, he pays for it over and over in suffering. I do not think there is anything about a beggar that sets him in a different class from other people, or gives most modern men the right to despise him."

But to labour as Sisyphus does is perhaps our fate. 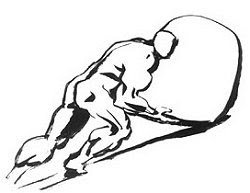 What if it is cubical and not spherical?