"For decades now in America we have been witnessing a steady and sickening denigration of humanistic understanding and humanistic method. We live in a society inebriated by technology, and happily, even giddily governed by the values of utility, speed, efficiency, and convenience. The technological mentality that has become the American worldview instructs us to prefer practical questions to questions of meaning – to ask of things not if they are true or false, or good or evil, but how they work..."

"The speed of travel went from the horse to the jet plane. Then, some fifty years ago, it stuck. Urbanisation is a one-off. So, too, is the collapse in child mortality and the tripling of life expectancy. So, too, is control over domestic temperatures. So, too, is liberation of women from domestic drudgery.

By such standards, today’s information age is full of sound and fury signifying little. Many of the labour-saving benefits of computers occurred decades ago. There was an upsurge in productivity growth in the 1990s. But the effect petered out.


In the 2000s, the impact of the information revolution has come largely via enthralling entertainment and communication devices. How important is this? Prof Gordon proposes a thought-experiment. You may keep either the brilliant devices invented since 2002 or running water and inside lavatories. I will throw in Facebook. Does that make you change your mind? I thought not. I would not keep everything invented since 1970 if the alternative were losing running water.

What we are now living through is an intense, but narrow, set of innovations in one important area of technology. Does it matter? Yes. We can, after all, see that a decade or two from now every human being will have access to all of the world’s information. But the view that overall innovation is now slower than a century ago is compelling."

My in-laws have a sewing machine. Once almost every middle-class home I knew at Miraj used to have one.

I liked the sound it made.

Our home at Miraj, just like cooking gas, never had any. I don't remember seeing my mother even using it.  I always wanted us to get one.

Our neighbours at Miraj used to sell a brand of sewing machines at Sangli. I think they became prosperous in the process.

When my aunt Kumud-mavashi (कुमुद-मावशी) was widowed for the second time in 1971, one of the suggestions I heard was to 'empower' her with a sewing machine.

Not just homes but almost every movie- Hindi or Marathi used to have one. Poor mothers- especially widows- brought up our heroes or heroines stitching clothes.

Just like NREGA today for rural poor, sewing machine once was thought to be a panacea for middle-class 'poverty'.

Evgeny Morozov writes in New Republic, May 27 2013:
"The sewing machine was the smartphone of the nineteenth century. Just skim through the promotional materials of the leading sewing-machine manufacturers of that distant era and you will notice the many similarities with our own lofty, dizzy discourse. The catalog from Willcox & Gibbs, the Apple of its day, in 1864, includes glowing testimonials from a number of reverends thrilled by the civilizing powers of the new machine. One calls it a “Christian institution”; another celebrates its usefulness in his missionary efforts in Syria; a third, after praising it as an “honest machine,” expresses his hope that “every man and woman who owns one will take pattern from it, in principle and duty.” The brochure from Singer in 1880—modestly titled “Genius Rewarded: or, the Story of the Sewing Machine”—takes such rhetoric even further, presenting the sewing machine as the ultimate platform for spreading American culture. The machine’s appeal is universal and its impact is revolutionary..."

If only, in the then India, Jansangh had little more weight...imagine 'Hindu institution'...the ultimate platform for spreading Indian culture...Rathyatra with a sewing machine mounted atop!

courtesy: Wikimedia and the United States Library of Congress's Prints and Photographs division

"Even its marketing is pure poetry:
On every sea are floating the Singer Machines; along every road pressed by the foot of civilized man this tireless ally of the world’s great sisterhood is going upon its errand of helpfulness. Its cheering tune is understood no less by the sturdy German matron than by the slender Japanese maiden; it sings as intelligibly to the flaxen-haired Russian peasant girl as to the dark-eyed Mexican Señorita. It needs no interpreter, whether it sings amidst the snows of Canada or upon the pampas of Paraguay; the Hindoo mother and the Chicago maiden are to-night making the self-same stitch; the untiring feet of Ireland’s fair-skinned Nora are driving the same treadle with the tiny understandings of China’s tawny daughter; and thus American machines, American brains, and American money are bringing the women of the whole world into one universal kinship and sisterhood."

Matching that poetry and sisterhood is the following image: 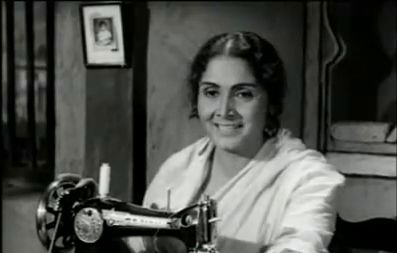 There is a line in the song: 'सर्वभार घेतला असा समर्थ खांब तू' (You are the capable pillar that endures all the pressure.)....Is she singing to Singer?

In 19th century India and earlier, women sang as they sat at the grinding stone. When used in 20th century around me, I liked the sound it made. Here is that machine: 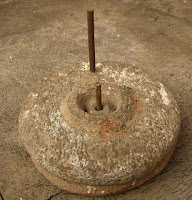 "...And what of the almighty sewing machine? That great beacon of hope—described as “America’s Chief Contribution to Civilization” in Singer’s catalog from 1915—did not achieve its cosmopolitan mission. (How little has changed: a few years ago, one of Twitter’s co-founders described his company as a “triumph of humanity.”) In 1989 the Singer company, in a deeply humiliating surrender to the forces of globalization, was sold off to a company owned by a Shanghai-born Canadian that went bankrupt a decade later. American machines, American brains, and American money were no longer American. One day Google, too, will fall. The good news is that, thanks in part to this superficial and megalomaniacal book, the company’s mammoth intellectual ambitions will be preserved for posterity to study in a cautionary way. The virtual world of Google’s imagination might not be real, but the glib arrogance of its executives definitely is."