V S Naipaul willynilly became poster boy of Hindutva brigade during NDA administration in India. (The brigade perhaps didn't include Shiv Sena because Naipaul has called Bal Thackeray a 'failed cartoonist'!). India Today has put him on the cover of its issue dated September 10, 2007.

When I read V S Naipaul’s “India: A Wounded Civilization” (first published 1977), it was one of my most profound experiences. The book still has not left me.

Commenting on Mahatma Gandhi’s description of his passage to England from “The Story of My Experiments with Truth”, Naipaul said (“A Defect of Vision”):
“…That is the voyage: an internal adventure of anxieties felt and food eaten, with not a word of anything seen or heard that did not directly affect the physical or mental well-being of the writer. The inward concentration is fierce, the self-absorption complete…. Though Gandhi spent three years in England, there is nothing in his autobiography about the climate or the seasons, so unlike heat and monsoon of Gujarat and Bombay…No London building is described, no street, no room, no crowd, no public conveyance…”

Reading this was like touching a hot pan, waking up from a deep slumber.

See picture below of “The Buddha preaching” at Sarnath.

SN 1054 (Crab Supernova) was a supernova that was widely seen on Earth in the year 1054. It was recorded by Chinese and Arab astronomers as being bright enough to see in daylight for 23 days and was visible in the night sky for 653 days, outshining the most brilliant stars in the heavens.

Dr. Jayant Narlikar in his book “The Scientific Edge” (Penguin Books India 2003) has a chapter titled “The Search for records of the Sighting of the Crab Supernova”. It describes Herculean efforts put in by his team to locate any record of this grand celestial event in Indian historical records, including popular literature.

Sadly, they failed. Narlikar has not blamed Muslim invaders for this.

Is it because of our ancestors’ Gandhi-Buddha-like self-absorption described by Naipaul so eloquently?

In the Nobel lecture on Dec 7, 2001, Naipaul said:"...I am near the end of my work now. I am glad to have done what I have done, glad creatively to have pushed myself as far as I could go. Because of the intuitive way in which I have written, and also because of the baffling nature of my material, every book has come as a blessing. Every book has amazed me; up to the moment of writing I never knew it was there. But the greatest miracle for me was getting started. I feel - and the anxiety is still vivid to me - that I might easily have failed before I began."

Well, he has failed with his ‘new’, 29th book “A Writer’s People: Ways of Looking and Feeling".

First of all there is nothing new in this book. Second he makes sweeping statements without backing them up.

Naipaul’s biggest problem, like most Western analysts of India, is he does not read any Indian language. That is a big handicap because best of India has always been expressed in its native languages. And tragically, it is not always translated in English.

I wish Naipaul read Marathi. If he did, he would read Vinoba Bhave's Marathi books and realize why, along with poet-saints, Vinoba is Marathi's rare 'best-seller'.

Naipaul says "(In India) literary criticism is still hardly known as an art". This is far from the truth. He should care to read Dilip Chitre's book on Tukaram ("Punha Tukaram" which also is available in English) or Durga Bhagwat's commentary on Mahabharata ("Vyas Parva") or M V Dhond's criticism of B S Mardhekar's poetry ("Tarihi Yeto Vas Phulana") etc.

Naipaul says 'Indian writers to speak generally seem to know only about their own families and their places of work". This may be true of R K Narayan or Vikram Seth but not of Bhau Padhye- the original chronicler of Bombay (ahead of Vikram Chandra) in all its colours.

Naipaul like most Indians does not know when to shut up, when to retire. Man has become caricature of himself.

The Buddha preaching, Sarnath, fifth century A.D. (ASI Museum, Sarnath). This is the classic image of the Buddha that was developed in the Gupta period. The mudra suggests that he is teaching and setting in motion the wheel of Dharma, also seen in the panel. The inward look, with the gaze centred on the tip of the nose, conveys a great sense of peace and tranquility. 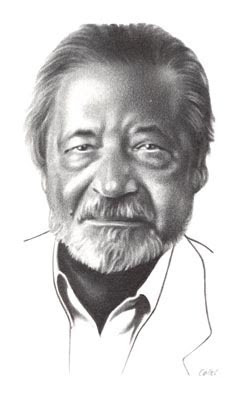 The Spectator September 15, 2007 has published this picture of Naipaul as a cartoon. Vasant Sarwate वसंत सरवटे has drawn caricatures (अर्क चित्रे)of many Marathi authors and publishers.
Posted by Aniruddha G. Kulkarni at 10:39 AM No comments: