Are women at the mercy of biology?

During my childhood in sixties and seventies, monthly period was a subject that could not be avoided (how do you turn down an invitation to participate in religious activities?) yet could not be discussed directly. Many euphemisms were invented. I remember one – ‘Dog touched’. My mother used it and we interrogated her mercilessly- how the hell it did! She always came up with a story. Not very convincing most times.

Although my mother never practiced it, we saw most women of Brahmin households “sitting Out/Aside/Away” during those "dog-touched” days. They were not allowed to ‘touch’ most things and people. They almost became 'untouchables'. They used separate set of utensils for eating, wore separate set of clothes and so on. The whole day, they sat in a shadowy corner of the house.

I felt great mystery every time I came across a “sitting OAA” woman. Now, how the hell did a dog touch her?!

These days in cities I don’t come across women “sitting OAA” but the subject is still treated with some hesitation. We have dozens of sanitary napkin brands on the market today, but their advertisements continue to be shrouded in mystery.

I guess the practice of "sitting OAA" had a lot of merit. It made sure a woman was freed of physical labour (sample these killers- fetching water, cooking, washing clothes) and sex during menstruation. It gave her much needed rest.

I never heard menopause being discussed at all. So following headline would sound from planet Venus. 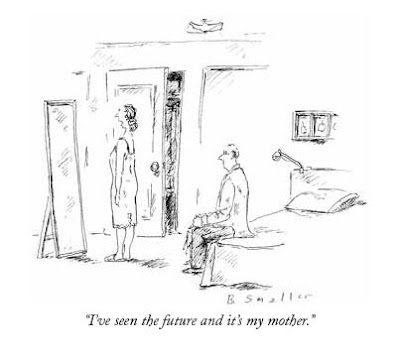 Artist: Barbara Smaller The New Yorker 1 Nov 1999
Posted by Aniruddha G. Kulkarni at 12:57 PM No comments: Links to this post