Nora, whatever you do, don't slam the door as you leave!

We all know Kipling’s famous words: "OH, East is East, and West is West, and never the twain shall meet". Indeed ways of the twain are so very different even in some minor matters.

Case in point is a mundane act of door closing. Slamming the door is ingrained in western culture.

One of the greatest plays produced in West is Henrik Ibsen’s “A Doll’s House” (1879). It made a lasting impression on me when I read it in school. I have often wondered what if my mother (in the past) and wife (in the present)were to behave like Nora Helmer. The thought has scared me.

In play’s climax, Nora walks out on her husband and kids slamming the door behind her creating a sound, once described by critics as the sound that ''reverberated across the roof of the world''.

“A Doll’s House” cannot be perhaps as effective in the East partly because we don’t have that “slamming the door” culture. We Indians are often told to close the door softly. It is probably because until recently we did not have many doors with a latch!

When I interacted with Americans and Europeans I immediately noticed how they almost always slammed the door. Therefore, I was not surprised to see following picture. 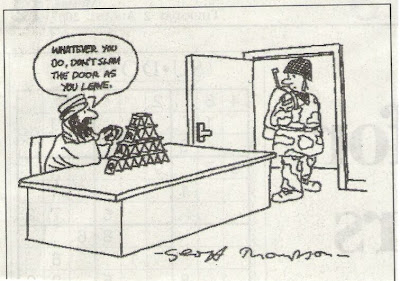 Artist: Geoff Thompson
Posted by Aniruddha G. Kulkarni at 4:43 PM No comments: Links to this post