Marathi can be such a vibrant, colourful language! Here is one example.

In my childhood, English movies, released at theatres, had no Hindi subtitles. The knowledge of English was not as widespread as is today. Sound at the cinema was often poor. It was some times hard to even catch Marathi dialogue.

Like most people, I too struggled with English movies. But like English books, I kept trying. (My father used to tell us not to bother about meaning of each word when we first started reading English books. He thought it killed the joy of reading.)

One of the most important tool to promote any film was usage of large billboards and posters. Occasionally the posters were paraded across the city using brass-bands.

I have forgot most of the beautiful girls I came across in real life but not posters of movies! I still remember where all they were hung in Miraj.

The posters of English movies carried Marathi translation of the titles. They often carried a brief summary of the story.

One such memorable title was 'प्रलयकाळी धरणीकंप' (Earthquake on the doomsday). It was translation of 'One Million Years B.C.' (1966)!

I feel Marathi title is better than the English one. It also is far more realistic too because although I don't mind them meeting in delighful comic strip 'B.C.' by Johnny Hart, humans and dinos were separated by millions of years on this planet. (Lucky us!)

I saw the movie in early 1970's at Amar talkies. I was attracted to it by its poster and Marathi title.

I liked the film ok. I recently saw it again.

I don't remember what I liked then: the fight between a Ceratosaurus and a Triceratops- both of them look like caricatures of what we now know they looked like in real- or scantily clad Raquel Welch!

All three of them are in the poster below. 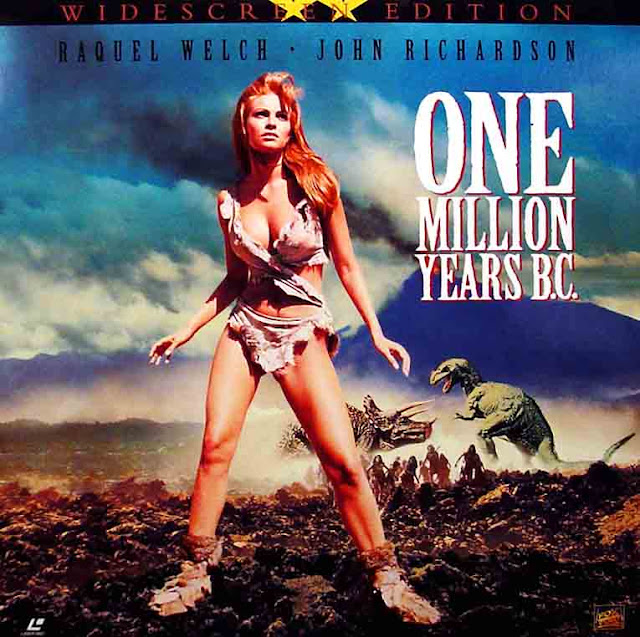 Wiki informs: "...The publicity shot of Welch from the movie became more famous than the movie itself, becoming a best-selling poster and something of a cultural phenomenon. The image can be recognized by people around the world, even among those who are not familiar with the film..."

Thank you Ms. Welch. You triggered by interest in dinosaurs many years before Jurassic Park.
Posted by Aniruddha G. Kulkarni at 9:00 AM