England has failed to qualify for Euro 2008. The British economy, by one estimate, could lose out on a £2 billion payoff...

Paul Doyle of The Guardian said:

"...The brutal truth of tonight's 3-2 defeat is this: England aren't one of the best 16 teams in Europe, let alone a world football power.

Blame it on the manager if you want, or a decadent society that means the country's current crop of players are more a bling generation than a golden one. Or perhaps it would be better to blame it on a blind fear and loathing of foreigners, the malaise that moved English fans to boo the Croatian national anthem before the game..."

“…. England’s failure to qualify for Euro 2008 would be akin to India not making it to the main draw of Asia cup.”

This comparison is not fair. The field for qualification for Euro 2008 was much stronger than Asia cup cricket.

But the point is taken. Gavaskar has always enjoyed rubbing it in when it comes to England. Me too!

Gavaskar also said:”…the English players are far more concerned about their club than their country…”

This may also happen to Indian cricketers once professional cricket leagues (Zee and BCCI) in India take off.

Does this loss matter to either team? I think not.

Football in England and Cricket in India are locomotives of massive commercial interests. Those interests keep everybody (media, fans, advertisers, sponsors, commentators, coaches) still follow the losers as closely as winners. In fact, winning or losing is only incidental.

I feel cricket matches in India in future may be organized like free-style wrestling bouts involving brothers, Dara Singh and Randhawa, at Vallabbhai Patel Stadium, Worli in the past: Opponents get beaten by Indian team to give Indian fans a huge high.

However, I know many English footballers thanks to their scantily dressed wives and girlfriends (WAGs), who keep making appearances on the pages of Indian newspapers almost every single day! Thank goodness, my familiarity with Indian cricketers is more direct! 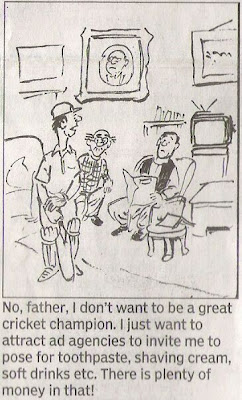