In last few years I have across articles like "If Odysseus Had GPS" where the author claims that if today's technology were to be available in the past, some of the world's great literature would not be borne. Or an essay "Call Me, Ishmael" that fantasises "...every thorny literary problem solved by modern technology..."

For me, it's complete baloney for technology doesn't solve any of our basic problems. It just packages them differently.

John Gray: "Today the good life means making full use of science and technology - without succumbing to the illusion that they can make us free, reasonable, or even sane. It means seeking peace - without hoping for a world without war. It means cherishing freedom - in the knowledge that it is an interval between anarchy and tyranny...

...At present we think of science and technology as means of mastering the world. But the self that struggles to master the world is only a shimmer on the surface of things. The new technologies that are springing up around us seem to be inventions that serve our ends, when they and we are moves in a game that has no end."

So if technology doesn't affect great literature, does inflation?

B V (Mama) Warerkar:"...all the money with the public is exhausted and, the little that is left with a few, is of no value because of the shortage of things..." (Dhule, 1944, Presidential address of Marathi Sahitya Sammelan)

Pune will host 83rd Marathi Sahitya Sammelan in 2010. I wonder if the presidential address will contain a thought on inflation.

The title of one of my previous posts read :"Inflation Hurts Literature too! तानी मावशीचे दोन आणे". Read it here.

In two years time, inflation has wreaked havoc in India.

"If you had paid Rs 500 at the beginning of the year 2009 for a kg of a dozen items in your grocery basket such as atta, rice, sugar and various dals, do you know how much it would cost you now? You would have to shell out at least 35 per cent more – or Rs 675 – for the same products, going by prevailing prices at major modern retail outlets..."

Poor in India spend most of their money on food.

The question I am asking is: Did we give our maid 35% raise this year?

The answer is NO.

Are we finding an excuse like the couple in the picture below? 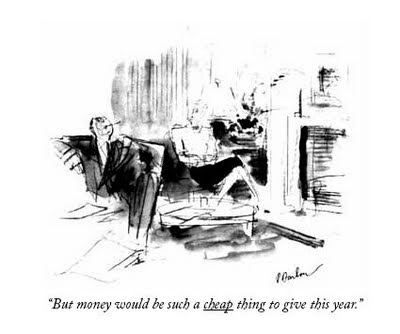