I am always fascinated by these words:

For many years in my childhood at Miraj, I observed tongas (light horse-drawn carriage) and, more intently, horses that pulled them. The leash sat so tight...not to mention the whip that lashed...गच्च लगाम. (One of the most interesting activities then was watching nailing of horseshoes to the horses and bullocks.)

But then there is always a hope of freedom...Hope springs eternal.

Following is one of the greatest cartoons I have seen. I can see it everyday and still be amused by it.

Descend your eyes from the top to the bottom of the picture.

The cell resembles the space described in G A Kulakrni's (जी ए कुलकर्णी ) "Swami" (स्वामी) where the head of the sect is held forcibly and a kingdom rules in his name outside.

As G A describes the prison cell- read that at the end of this para- one thinks the Swami has no hope in hell of escaping or even committing suicide. Despite that the Swami fights back. Some opium has been hidden by the previous unfortunate inmate of the cell. Swami unearths it and dies eating it. He chooses to die as he lets another life, a weed, choke the only air-inlet pipe on its journey to the sunlight. 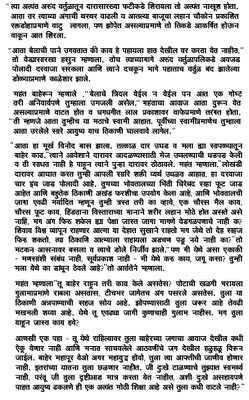 Shel Silverstein's Papillon is more ingenious. He has thought of a plan to escape. Alive.

Wiki informs: Silverstein was both fascinated and distressed by the amount of analysis and commentary that almost immediately began to swirl around the cartoon. "A lot of people said it was a very pessimistic cartoon, which I don't think it is at all," he said. "There's a lot of hope even in a hopeless situation..."