Sadly, Marathi cinema, unlike say Tamil or Telugu cinema, is not sharing this bounty adequately. Is it dying?

“Marathi people have lost pride in their mother tongue . They do not watch Marathi films or plays...Lack of an audience is a major hindrance for Marathi filmmakers and distributors… ”

Actor, producer Ramesh Deo रमेश देव readily agreed threatening that if this trend continued Marathi films would not be produced any more.

Ramesh Deo should know better. He acted when Marathi films fared much better. They had warmth, interesting storyline and soulful music.

He and his son are now going to release a film on the life of Vasudev Balwant Phadke वासुदेव बळवंत फडके, one of the most liberal and inspiring characters of 19th century India. I hope it will be a good film based on the criteria of a good cinema and not just because it’s based on the life venerable Vasudev Balwant. (There already is a huge benchmark as Phadke's life may have inspired Bankim Chandra Chatterjee to write the novel Anand Math in 1882. The novel has already been turned into a movie in 1952 starring inimitable Geeta Bali)

And Ms. Talwalkar, how about you producing half a good Marathi TV serial after heralding the age of decadent serials with “Avantika अवंतिका”?

It’s not lack of pride but their bad quality that puts me off Marathi films. I don't know why urban middle-class Marathi speaking people start waving flags as soon as anything goes against their wishes.

In Kolhapur, south Indian films do huge business because they are better than Marathi films.

I hope Marathi speaking Rajnikanth's megahit Sivaji gets dubbed in Marathi. It will set Marathi box office on fire, the way it did during the times of V Shantaram व्ही शांताराम or Dada Kondke दादा कोंडके.

I have tried to watch many Marathi films after 1982 but they are lousy and unwatchable. During this time, Marathi had some very good talent-like the late Laxmikant Berde लक्ष्मीकांत बेर्डे- but they wasted it.

I don’t recall a single song of any Marathi film since "The Threshold उंबरठा".

Much talked about “Breath श्वास” (2003), I found tear-jerker and boring. Nothing wrong with sentimentality though. Shyam's Mother श्यामची आई (1953) , a 'sentimental' film, on the other hand is one of the greatest film made in India.

Jabbar Patel जब्बार पटेल made bad film on Dr. Babasaheb Ambedkar’s life (1998). I thought here we go again. Richard Attenborough turned Gandhi into a classic, in both Hindi and English, while Ambedkar gets unfair treatment even here. 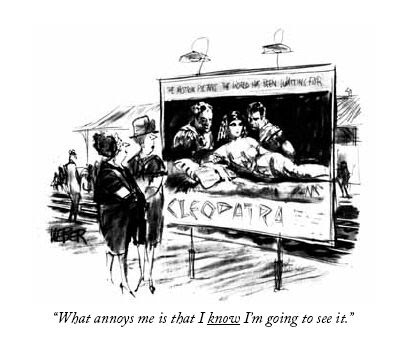 Artist: Robert Weber The New Yorker 20 July 1963
Posted by Aniruddha G. Kulkarni at 9:00 AM 4 comments: Links to this post