“In the age of hi-tech movies with brilliant sound effects, constant television, multimedia games and blockbuster book series of the likes of Harry Potter, the 'Ek tha raja, ek thi rani' type of stories of the yore narrated by grandmothers still remain uniformly popular among children across the world.
Fairytales, and tales of adventure of swashbuckling pirates and sailors, legends, myths and folklores predominantly form the substance of tales traditionally used to regale children over centuries remain an eternal favourite among children according to a large number of bards and authors who had gathered in the capital recently.

Hailing from across 18 countries they had come to participate in a storytelling conference organised by the Indian chapter of the International Board of Books for Young People, the Association of Writers and Illustrators for children.”

My son had a rare distinction. Until my mother passed away, he was one of the few in his class whose all four grand parents were alive! Since we stay very close to where my in-laws live, my son gets to spend lots of quality time with his maternal grandparents. How lucky!

I don’t think I heard too many stories from my grandparents. However, my mother filled the role of all our grandparents when it came to stories. Each dinnertime, for number of years, was a storytime. Panchtantra, Ramayan, Mahabharat, Shivaji (Hirkani was a favourite) dominated prime time.

Her father, for whom fact and fiction were often interchangeable, was a great raconteur! So too was my mother’s elder sister. Listening to Tai-mavashi’s narration of stories of Hindi films like Mehmood’s Sadhu Aur Shaitan (1968) and Bombay to Goa (1972) was a funnier experience than watching those films on big screen.

Listening to mother’s stories was like returning to her womb and falling asleep there.

The experience has been summed up very well by author Shrinivas Vinayak Kulkarni in his story: आम्ही वानरांच्या फौजा (We Monkey Armies, डोह,Mauj Prakashan, 1965).

Author’s grandma is telling him a story as he falls asleep:

(You incarnated at Gokul, we in cowherd gathering
You were King Ram, we monkey armies)

Not everyone is of course impressed with being a grandma! 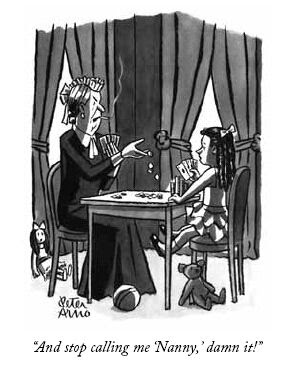 Artist: Peter Arno The New Yorker January 30 1960
Posted by Aniruddha G. Kulkarni at 11:57 AM No comments: Links to this post