The Asian Age March 24 2011:
"Minister of state for environment Jairam Ramesh on Wednesday launched a nationwide campaign to reduce noise levels across India, as it was turning “too noisy”..."

"...What if we tried to listen to nothing? Silence is the feature of our buzzing sound-world we enjoy least, whose very existence we threaten to pave over track by track. Silence is the most endangered musical experience in our time. Turning it up, we might figure out what all our music listening is meant to drown out, the thing we can't bear to hear."

"In public spaces, serendipitous interaction is needed to create the 'mob mentality.' Most iPod-like devices separate citizens from one another; you can't join someone in a movement if you can't hear the participants. Congrats Mr. Jobs for impeding social change."

"People are uncomfortable in silence because it can breed needless contemplation and may engender a floating into the deeper world of the self."

I celebrated the end of cricket ODI world cup because it was my life's noisiest sports tournament in India. Noisier than even Ganesh Chaturthi and Diwali.

The interesting aspect is: Chitragupta reads out one's life's balance sheet to the dead.

Alas there was very little show on the credit side. But at least they heard what was read out.

We mayn't be that lucky. 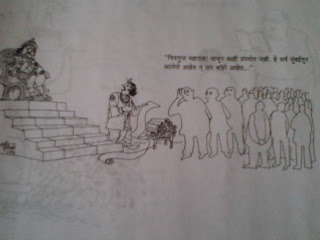 (apologies for the quality of cartoon's reproduction as my scanner is still down. Please open the picture in another window to get a better view.)

("Chitragupta Maharaj! No point reading. They all have come from Mumbai and are stone-deaf...)