Mayawati, Spare Nautch Girls. We Owe a Lot to Them.

“LUCKNOW: The 'feminist' in chief minister Mayawati surfaced on Tuesday when she warned her party leaders against hosting or attending events where women are made to dance in an obscene manner or exhibit their bodies.

" Agar tumhari maa aur beheno ko nachaya jaaye toh kaisa lagega (how will you feel if women of your family are made to dance)?" behenji thundered, and added that her party MLAs and MPs would be expelled if they dared to go against her wishes. Mayawati was particularly angry with her party leaders from Hardoi, who were caught on-camera watching dance show by bar girls.

"Didn't you feel ashamed of yourself? What values you will pass on to your children? Learn to respect women... I won't tolerate this anymore," Mayawati told party leaders. Instead, she said, host programmes that enlighten people about the great personalities and bahujan samaj.

"You can also invite BSP's social awakening groups for performance," she said. In her party review meeting, Mayawati spoke for an hour on "respect for women". “

I feel Mayawati is wasting her time and political capital on this because nautch girls have always been with us and will continue to be so.

Mountstuart Elphinstone (1779-1859), governor of Bombay, was one of the finest “British official in India who did much to promote education and local administration of laws.”

Philip Mason author of “The Men Who Ruled India” (1953) describes him thus:

“…Breakfast with Elphinstone would have been all pleasure. A companionable silence would be possible; there is wit in his face and in all he wrote or said, but there is no cynicism or spite or self –seeking; he can be detached, humorous, resigned to the inevitable, and yet enthusiastic as a boy…

…The news came that he was to be Governor of Bombay. He was by no means elated; he has been cured of ambition long ago, his brain was too fine, his temper too philosophic, his humour too astringent, to take pleasure in power or success or adulation for their own sake”

This stoic remembered nautch girls on a visit to Calcutta in 1807 thus:”Here there were such lots of women and laughing and philandering that I was in heaven.” 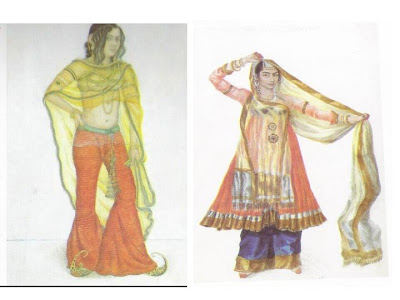 I hope in man's cruel world Piari Jan or Malageer never backed into a sizzling Tandoor like poor Valerie did in the picture below! 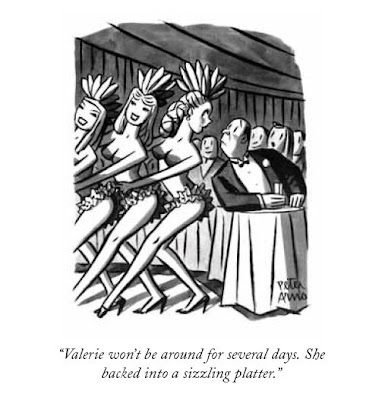 Artist: Peter Arno The New Yorker 7 May 1949
Posted by Aniruddha G. Kulkarni at 9:00 AM No comments: Links to this post