Year 2013 is 200th Anniversary of Publication of 'Pride and Prejudice'

"...Even before the defeat of Maratha's and the spread of influence of The East India Company across India a great female novelist like Jane Austen had already lived in England..."

"...We blamed the khap panchayat for its constant diktats against same-gotra love, same-village love; we rightly blamed the parents and they were arrested for this never-in-a-million-years-will-we-forget lesson against love; we blamed the politicians who silently encourage these khaps; but I think, that much of the blame lies with us, for still treating love marriage as abnormal and arranged as the norm. And every time one of us, educated, supposedly independent, individuals agrees to marry someone not of our own choosing, someone we don't love, we are silently condoning those who kill to oppose the concept of love marriage...."

'Pride and Prejudice' has more than 2,50,000 'likes' on Facebook and, as per Wikipedia, to date has sold some 20 million copies worldwide.  Jane Austen is not just a very popular writer today, she remains highly relevant.

The latest Helen Fielding's book in the series of Bridget Jones- 'Bridget Jones: Mad About the Boy', 2013- is, like the previous two books, is also loosely based on Austen's work. 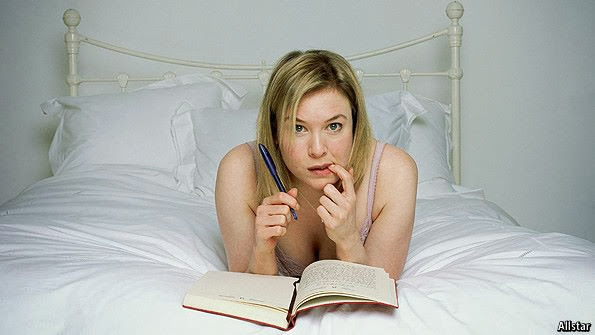 
'Pride and Prejudice' starts with these opening lines:

"It is a truth universally acknowledged, that a single man in possession of a good fortune, must be in want of a wife.

However little known the feelings or views of such a man may be on his first entering a neighbourhood, this truth is so well fixed in the minds of the surrounding families, that he is considered as the rightful property of some one or other of their daughters..."

David M. Shapard says about them:

"The famous opening line, with wonderful economy, accomplishes two main purposes. It indicates the novel's central subject of marriage, along with the financial considerations usually involved in it. It also sets the tone of irony that will pervade the book, for in fact, as we immediately see, it is the single women in this society who are truly in want, or need, of a man of large fortune. The term “acknowledged” adds to this effect, for it suggests the possibility that this supposed truth about single men may be more valid in people's beliefs than in reality. "

Now, I discovered only recently to my delight that Ms. Austen's book has been translated into Marathi.

The publisher admits that Gokhale has added to the original at some places.

But I was confused with the Marathi title itself- "Fifty years from now !". How does "Pride and Prejudice" translate into that? And why exclamation mark in the title? 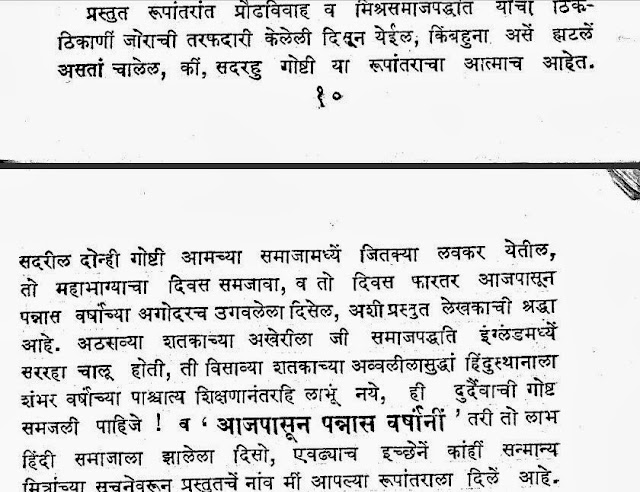 How does the translation begin? How does it handle the famous opening lines quoted and commented upon above? 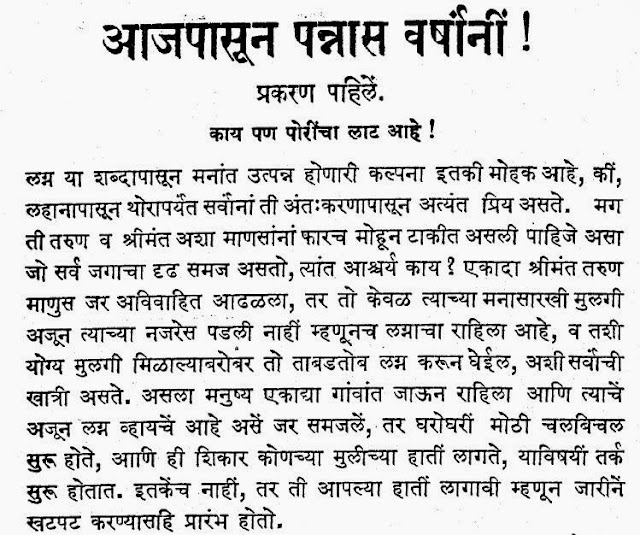 "The concept that gets created in mind by the word marriage is so enchanting that it's very dear from the heart to everyone from the children to the adults..."

Ms. Austen says nothing like this- enchanting, dear, heart- in her opening para. How can she praise the institution of marriage so unabashedly at the start? How can she be so opinionated in the beginning?

Marathi translation, in the process, also loses the 'economy' that Mr. Shapard talks about: 120+ Marathi words for about 70+ words of English.

English may have been our closest foreign language for a while but looks like its translation has always remained a challenge. 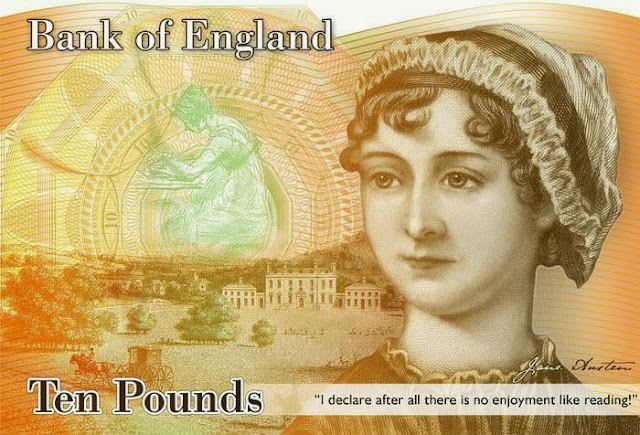 Posted by Aniruddha G. Kulkarni at 7:45 AM 3 comments: Links to this post