Many Indians surely watched their first lynching in 1947

We Indians are obsessed with sex but don’t wish to talk about it. Sex is not the only such subject. There are few more touchy subjects from our history we avoid discussing in detail.

India’s partition in 1947 is one such along with “The Great Bengal Famine”.

I was a sincere student of history in my school and there was hardly any information in our text books on them- two of the greatest tragedies of 20th century.

India soon will be celebrating 60th anniversary of its independence.

The Economist (July 21, 2007) has reviewed British historian Yasmin Khan’s “The Great Partition: The Making of India and Pakistan”.

“…..The break-up of Britain's Indian empire involved the movement of some 12m people, uprooted, ordered out, or fleeing their homes and seeking safety. Hundreds of thousands of people were killed, thousands of children disappeared, thousands of women were raped or abducted, forced conversions were commonplace. The violence polarised communities on the subcontinent as never before. The pogroms and killings were organised by gangs, vigilantes and militias across northern, western and eastern India. They were often backed by local leaders, politicians from Congress and the Muslim League, maharajahs and princes, and helped by willing or frightened civil servants….

Today the upheaval on both sides of the partition line would be described as ethnic cleansing on a gigantic scale. It left two traumatised, injured nations—suspicious and fearful of one another even to this day—where once there had been one country of loosely interwoven peoples….

The decision to divide India on religious lines was taken with regret but little foreboding and carried out with outrageous haste and unconcern by the British government and its viceroy in India, Lord Mountbatten. Asked by a journalist if he foresaw any mass transfer of population, Mountbatten said, “Personally I don't see it...Some measure of transfer will come about in a natural way...perhaps governments will transfer populations.”

No preparation or consideration was given to the central issues of citizenship, security and property rights in the division of the country. On the other hand, India's civil servants, the babus of empire, were busy itemising every fixture in their offices down to ink pots and paperweights that were to be divided between Pakistan and the new India. Lack of planning, hubris, confused thinking and a complete void as to the consequences were the fatal flaws in the partition plan, writes Ms Khan.

The announcement that India was to be partitioned and independence would follow not less than a year later was made in the House of Commons on June 3rd 1947. By August 15th the British were gone. They accepted no responsibility for the carnage that was taking place and they refused to allow the British troops still in India to keep order or protect people.

The movement of people and the privations they suffered were extraordinary. Muslims made their way west to Pakistan; Sikhs and Hindus moved east to India in “foot convoys” that involved 30,000-40,000 people, wagons, carts and animals spread out over 45 miles (70km). In one month 849,000 refugees entered India by foot. Trains that were impossibly overloaded, and dangerously targeted by the killers, ran across Punjab from Rawalpindi and Lahore to Amritsar and Delhi and back again as soon as they had refuelled and watered. Many families left for reasons of safety, taking only a few belongings because they expected to return. Not everyone imagined the journey across the partition line would be final.

When Jawaharlal Nehru made his famous speech on August 15th declaring that at the midnight hour, when the world slept, India would awake to life and freedom, massacres were taking place almost daily on both sides of the line. Nehru later wondered if his fellow countrymen knew how close India had come to imploding. The violence was simply uncontrollable.

Despite the pledges of equality for all communities in the new India and Pakistan, the driving force behind the violence was to eliminate or devour the other community, writes Ms Khan.”

Reading this, I thought, Iraqis are luckier than Indians. They have George W. Bush and no Lord Mountbatten.

And then we have historians like Ramachandra Guha who claim that Mountbatten helped avoid Balkanisation of India. I am not sure.

Historian Setu Madhavrao Pagdi, who was employed as a senior civil servant in Hyderabad in 1948, claims in his Marathi autobiography ("Jeevansetu" 1969 Continental Prakashan) that Mountbatten was part of the problem and not the solution in bringing Nizam around to sign instrument of accession.

According to historian Indivar Kamtekar: “…For the people who lived through the events of the 1940s, the meaning of the events depended on their experiences. Experiences are notoriously varied and contradictory. They varied in the 1940s with - among other things - region, social class, gender, ideology and political affiliation. For the villages of Bengal, the great famine dwarfed most other events of the 1940s. In north India, 1947 is still referred to as the year of `partition' rather than independence; in South India, the reverse is the case. For businessmen in India, the 1940s were a time of unprecedented war profits; for agricultural labourers, they were years of frightening starvation. For women abducted during the partition riots, and then claimed by the governments of India and Pakistan even when their families rejected them, the period was exceptionally traumatic, with little or nothing to celebrate. If the elation of many Congress politicians in 1947 was visible at one extreme, the grief of the victims of famine, rape and murder was discernible at the other. The past bequeaths to us a rich diversity of memory.”

Conclusion: Many Indians surely watched their first lynching in 1947. 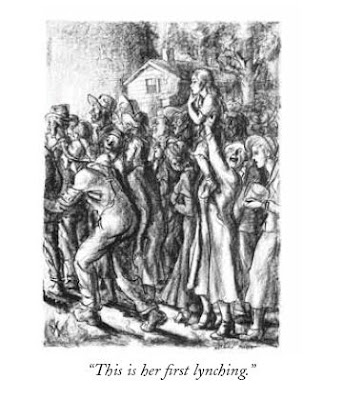