And my son has watched a lot of Sanjay Raut, Shirish Parkar, Abu Azmi, Vinayak Mete...

"You will not find a single hard word in the entire Dnyaneshwari...such tenderness lies at the beginning of our literature is a matter of great happiness..."

My 15 year old son and I watched, on Nov 20 2009, the violence that took place in IBN-Lokmat's, Mumbai studio and its aftermath.

On Nov 21, he put up his worst ever behaviour with his mother.

Was it just a coincidence?

"...It has been known for 20 or more years that television induces mental disorders, such as enhanced aggression, shortened attention span and reduced ability to communicate, and that these disorders involve an even greater social cost than the obesity and lethargy that are TV’s normal physical side-effects. Research by the psychologists Mihaly Csikszentmihalyi and Robert Kubey has shown that television is also addictive, setting up pathways to pleasure that demand constant reinforcement. As a threat to the nation’s health, it stands far higher than alcohol, drugs or tobacco, and the worry is that it may be too late to do anything about it, since the addiction is all but universal...

...When children are distracted by a flickering screen from the earliest age and never encouraged to explore the real world, they will not develop the capacity to communicate with other humans, or to cope with the stresses of real encounters. They will take the short way out, which is not the way of communication but of aggression...

...But that is not how television is used. It is a constant flickering presence that competes for attention with all the necessary goings-on of everyday life. Over the years, as its impact has stalled, it has had recourse to ever more vulgar colours, ever grosser language and ever more mesmerising facial close-ups..."

"...Our claim is that children who grew up watching a lot of TV, even the most innocuous family- friendly shows, were more likely to engage in crime when they got older..."

My son is not very familiar with Dnyaneshwari but has watched not just "the most innocuous family-friendly shows" but a lot of Sanjay Raut, Shirish Parkar, Abu Azmi, Vinayak Mete... 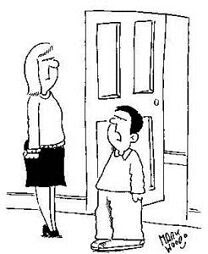 'Sorry about the language when I came home last night, Mum — it was just the drink talking.'

Was it the drink talking or TV?
Posted by Aniruddha G. Kulkarni at 9:00 AM 2 comments: