Do We Use Hygiene to Make Caste Distinctions? Remembering Gadge Maharaj.

I was borne to Brahmin parents (mother Chitpavan) and am married to one. I didn't undergo a thread ceremony until a token one just before marriage. I always dreamt of marrying outside caste or religion but couldn't.
I often feel deep guilt about the way Brahmins in the past treated the Dalits. If ever I attend a Brahmin congregation, I will press for a resolution of expressing collective apology to the Dalits. Similar to what Indians want the British monarch to do for Jallianwala Bagh.

The one thing I have noticed since my childhood in Brahmin households is their preoccupation, bordering on fixation, with bathing. The most important job to be done on any day of the year is bathing. The exercise is not often elaborate; it may or may not involve sufficient water or toiletries but has to be done with.

No wonder Saint Samarth Ramdas समर्थ रामदास(1608-1681) ,a Brahmin, who has been credited by great historian and thinker T S Shejwakar त्र्यंबक शंकर शेजवलकर (1895-1963) to have instilled values of freedom among Marathi speaking people exclaimed with excitement:

Lots of Water Available / For bathing and praying.

Is bathing for Brahmins less about hygiene and more about virtue?

SARA IVRY wrote a review of “THE DIRT ON CLEAN / An Unsanitized History. By Katherine Ashenburg” in NYT December 16, 2007. The book focuses on Western Europe and the United States.

“…In her view, cleanliness has always been fundamentally about virtue, whether you’re an ancient Greek athlete scraping your skin with metal instruments after a workout or a modern consumer shelling out $50 for a toothbrush cover that emits germ-killing UV light. “The archetypal link between dirt and guilt, and cleanliness and innocence,” she writes, is “built into our language — perhaps into our psyches…

…while at least one 18th-century British doctor dismissed warm baths as a “luxury borrowed from the effeminate Asiatics.”

From the Renaissance until the Industrial Revolution, Ashenburg notes, the middle and upper classes generally feared water and washed as little as the poor, with monarchs perhaps being dirtiest of all. Only once the comfortable classes saw how quickly disease spread in urban tenements did they take to bathing more regularly…

… In the Middle Ages, the struggle between Christians and Muslims sometimes resembled a battle of the bathhouses…

… We use hygiene to make class distinctions, something already taken care of in less-fastidious Europe…

… In the end, Ashenburg argues, all our newfangled products haven’t taken us very far at all from our origin. We are still “as repulsed by our real bodies as were the medieval saints, although without their religious motivation.”
”

The man with the broom, Gadge Baba, a 20th century saint, was obsessed with cleanliness of our environment, our souls and not so much about his own appearance.

If at all heaven exists, Gadge Baba surely went there. And when god met Gadge Baba first time there, he admitted: "Well, you were right. (Personal)Neatness didn't count." 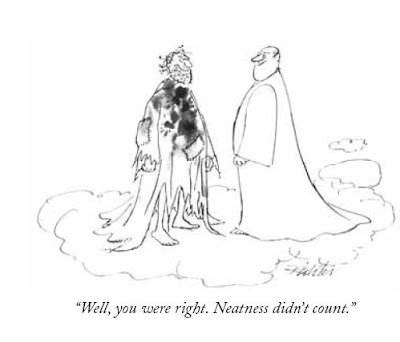 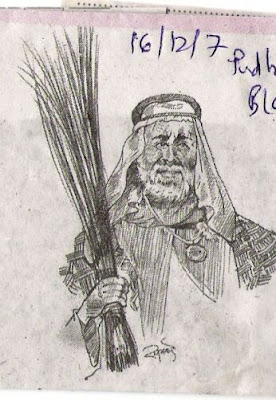 Gadge Maharaj with his trademark broom.

Picture Courtesy: Pudhari December 16, 2007
Posted by Aniruddha G. Kulkarni at 9:15 AM No comments: