Times of India on November 3, 2007 reported: “Jaswant in opium controversy”
“A brew served by BJP leader Jaswant Singh to welcome Rajasthan party dissident leaders at a much publicised at-home at his native village of Jasol in Barmer district is threatening to leave the host with a nasty after-taste.

The paper had reported in 2006: “Indians among highest opium users…According to the report, India has 25 million drug users, which makes the country account for 1/10th

A great leveller opium,like alcohol and tobacco, has always been with us.

I am told opium is eaten, drunk and smoked.

My father’s father- D G Kulkarni- was a political secretary to the ruler of princely state of Aundh- BHAVAN RAO SHRINIVAS, Pant Pratinidhi - until its accession to Indian union in 1948.

My grandpa's family hailed from Atpadi. His younger brother once came from Atpadi to visit him at Aundh and asked for something. Brothers had an argument. Younger brother wasn’t happy with the outcome. He felt so depressed that he bought opium from multiple vendors at Aundh-one could buy only a limited quantity from a vendor- and walked all the way from Aundh to Atpadi consuming opium all along. He died at the end of the journey.
(I have never known if my grandfather felt any guilt for this involuntary manslaughter and if he did, how he dealt with it.)

No artist has described as well as Graham Greene what it must feel while smoking opium pipes in the company of a Vietnamese girl. Read his “The Quiet American”. It’s very tempting!

“In northern India opium was drunk rather than smoked, and judging by the frequency with which opium shops appear in miniatures of the period, opium addiction seems to have been a major problem. Since the Company had the monopoly on the growing and trade in the substance, which by the 1890s provided an astonishing 40 percent of their exports from India, it of course made no attempt to control the problem.” 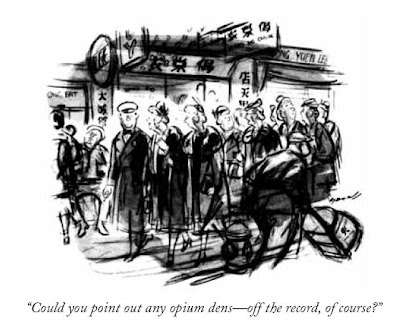 
Unlike New York of The New Yorker above in Delhi of following miniature you didn’t have to ask for opium dens, off the record! 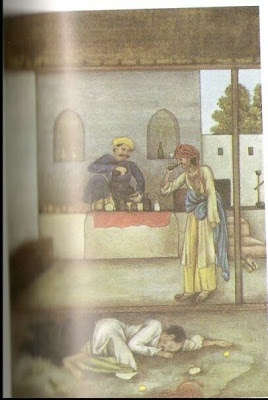