In the Room the Women Come And Go, Talking of Dev Anand

I owe a lot to Dev Anand, for the amount of pleasure his films have given, especially through their music. Therefore, I was looking forward to his book that I knew was in the pipeline for some time now.

I have still not read the book but have read excerpts in “India Today” issue dated October 1, 2007.

Dev Anand’s sex life has not been “a sad and desolate” place as he seems to have bedded many white and brown women-although we must hear from the girls to confirm this- but what about his love life?

It’s not a pretty picture.

Read this:
"Zeenat and I started being linked with each other in the magazines and newspapers that people hungry for gossip love to read. Whenever and wherever she was talked about glowingly, I loved it; and whenever and wherever I was discussed in the same vein, she was jubilant. In the subconscious, we had become emotionally attached to each other. After the premiere of Ishq Ishq Ishq at Metro cinema, Raj Kapoor kissed Zeenat in full view of the invited audience, congratulating her for her sparkling performance in the film. That must have made her evening all the more sparkling. Yet, I was jealous of him for making advances on what I considered my sole possession, my discovery, my leading lady, and desiring her with a kiss.

I felt I was desperately in love with Zeenat—and wanted to say so to her! To make an honest confession, at a very special, exclusive place meant for romance. I called her up to say, ‘Zeenie, I want to go out on a date with you tonight.’ ‘But aren’t we already going together to a party tonight?’ she asked me. ‘Let’s just go there only for a brief while, say Hi to the gathering, and then quickly disappear!’ Together we went to the party. It was on in full force. The first person who greeted Zeenat from a distance was a drunken Raj Kapoor, with a gallant drawl, ‘There she is!’ He threw his arms around her exuberantly. This suddenly struck me as a little too familiar. And the way she reciprocated his embrace seemed much more than just polite and courteous. My heart broke into pieces, I wanted to leave the party at once and go off somewhere alone, to be just by myself, so that I could swallow the humiliation thrust on my ego.”

This is petty. This is not romantic...”And the way she reciprocated his embrace seemed much more than just polite and courteous. “

Oh, thanks for not describing how hard her sumptuous breasts were pressing against Raj Kapoor’s chest! (Poor Raj Kapoor, this has been a bad month for him. First it was Vaijayantimala denying any thing more than 'Sangam' publicity between him and her and now this......Dost Dost Na Raha!)

I didn’t expect this from Dev Anand, some one from whom a generation or two of India learnt to love and romance.

To be honest, I always felt Dev Anand's acting in colour era of Hindi films- starting with Guide- was only an act of seduction, conquest of a girl, done with a style and good music.

“...GREENE was a restless traveler, a committed writer, a terrible husband, an appalling father and an admitted manic-depressive; he was relentlessly sexual, ardently priapic. ''I think his sexual appetites are voracious, frightening,'' one of his close friends remarked, though the man was English and so the word ''frightening'' must be taken with a grain of salt. But certainly Greene was a tireless sensualist. Like many other sexually obsessed men he tended to be noncommittal, evasive, given to unexplained vanishings and sentimental utterances, but forever feverishly on the prowl. He often complained of writer's block, but where women were concerned he was hypergraphic. He had the lecher's bouts of romanticism and fits of fantasy; these he set down on paper…

… Greene was not a Casanova, not vain in his conquests, not a scorekeeper (though he kept a detailed list of his 47 favorite prostitutes -- given here in an appendix). Greene was insecure, needy, insatiable, interested in variation and always willing to have a go. He preferred his women to be waiflike, boyish, petite -- he himself was well over six feet tall. The women in his novels tend to match that description, but of course they are based on women he had loved…”

I remember watching Dev Anand’s interview on “Rendezvous with Simi Garewal”. I was moved by his hurt on the death of his mother before he came to Bombay. I now think he never got over his loss. He still misses his mother. He never found the real love.

In his later life, did he mistake sex for love?

Freud has said: “"He who knows his mother's love and is secure in that knowledge will never know failure.” 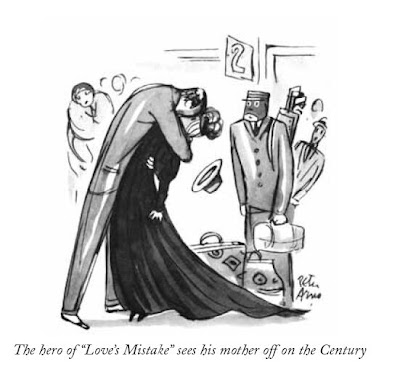 Artist: Peter Arno The New Yorker March 24, 1928
Posted by Aniruddha G. Kulkarni at 3:54 PM No comments: Links to this post