There Also Was Malati Karve...No Woman Wants to be Orphaned by a Cause

Karve's work has often been compared to her.

In the third essay, he analyses why Karve was not as much successful in his mission as Ms. Sanger and Marie Stopes.

Dhond feels Karve’s mission was not restricted to that of Sanger and Stopes: Happy family life, emancipation of women, control of population.

Karve also wanted women to have as much sexual freedom and sensual pleasure as men.

Dhond claims contemporary society’s objectives were restricted to those of Sanger and Stopes and hence not only Karve’s mission has a whole suffered, he himself was persecuted by society at large. There were other reasons too: Karve’s unattractive personality, poor finances and lack of networking skills.

There is a new book- graphic biography- out on Ms. Sanger's life: "Woman Rebel: The Margaret Sanger Story" by Peter Bagge.

(When will there be a graphic biography of Raghunath and Malati?  Amar Chitra Katha might do one but their writing and research are not often 'strong'.)

The book claims: "she had an open second marriage, counted HG Wells among her lovers and continued to enjoy a sex life well into old age.."

"The book is a fascinating testament to the ability of one person to make a difference in this world, as long as she’s a huge pain in everyone’s ass."

It also praises the graphics: "Bagge’s drawing style remains clearly identifiable: His rubbery, expressive characters are just top-hatted and corseted versions of the people who populated Seattle and New Jersey in Hate."


Rachel Cooke reviews it for The Guardian, January 5 2014.


The last paragraph of the review reminded me of the life of Karve's wife, Malati.

"...And then there are the poignant final pages, when she is an older woman, her work done (though the federal obscenity laws that effectively outlawed contraception were not finally overturned until 1970). In a combative television interview, she crumbles and winds up showing her interlocutor pictures of her grandchildren, an act that would have appalled her younger self. Bagge pictures her (once abandoned) son with his head in his hands, unable to watch. But perhaps his horror is braided with a thread of relief. No man wants to be orphaned by a cause, not even a very good one..." 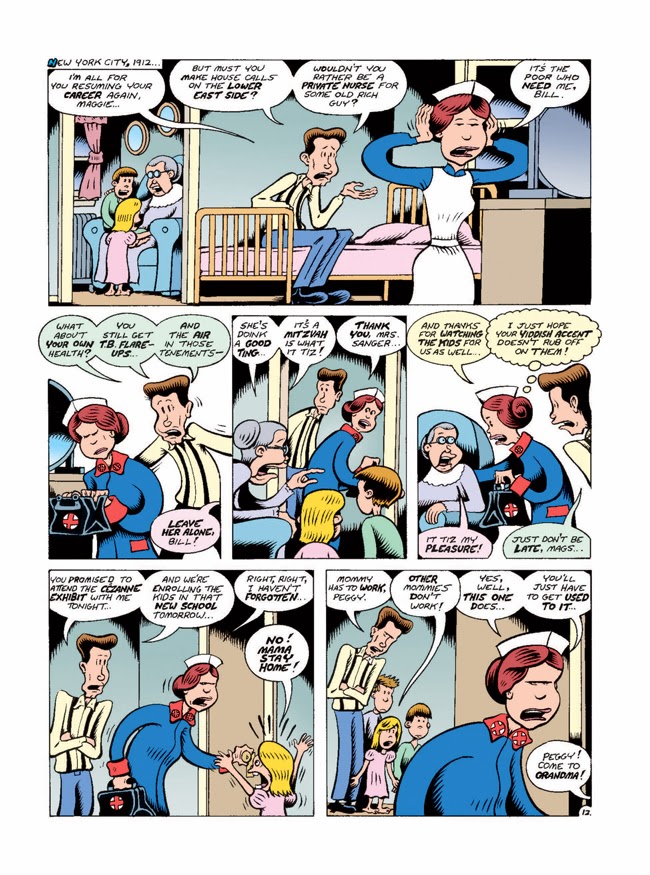