Where did Primal Couple of Paradise go to Stool?

I read Nicholas Lezard's review of "A Pocket Philosophical Dictionary" by Voltaire, translated by John Fletcher in Guardian, November 15 2011.

"...In the essay with the marvellous title "All Is Good" he cites a Syrian creation myth which tells how the primal couple, dwelling in Paradise, decide to eat cake instead of ambrosia and, suddenly needing to "go to the stool" (this is an earthy book) are directed by an angel to a tiny planet which is "the privy for the entire universe". "They went there and never came back," writes Voltaire, "and since then the world has been the way it is.""

On that not-so-tiny-planet, where exactly did they go?

"With India accounting for 58 per cent of all open defecations in the world, the government on Sunday sought active involvement of all parties concerned including women panchayat representatives to sensitise the people in creating awareness about public hygiene.

"On the occasion of Gandhi Jayanti, I would like to mention one such case which is a shame on all of us. No other country in the world where about 60 per cent women have to go to the field for open defecation," rural development minister Jairam Ramesh said in a function organised by the Hunger Project..."

The Telegrpah of Calcutta reported on Nov 14 2011:

"Rural development minister Jairam Ramesh today described India as the “dirtiest and filthiest” country in the world where people with mobile phones go out to answer the “call of nature”...

...“Today, if you go to many parts of India, you have women with a mobile phone going out to answer the call of nature. I mean it is paradoxical,” the minister, who also holds charge of sanitation, said at an event here.

I understand the minister's frustration but I don't understand when he says it is "paradoxical".

Has there been a study why people, especially in rural India, prefer to defecate in open even when they have access to a toilet? Is it because it probably requires less water? Why do 60% Indian women go to the field for defecation?

I asked my wife if she had a view. She said: Maybe they want to get away from their oppressive life for a short time. 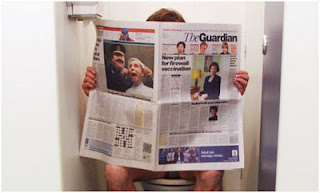 "...No writer owned the arena of toilet reading more than Henry Miller. He read truly great books on the lavatory, and maintained that some, Ulysses for instance, could not be fully appreciated elsewhere. The environment was one that enriched substantial works – extracted their flavour, as he put it – while lesser books and magazines suffered. He singled out Atlantic Monthly.

Miller went so far as to recommend toilets for individual authors. To enjoy Rabelais, he advised a plain country toilet, "a little outhouse in the corn patch, with a crescent sliver of light coming through the door". Better still, he said, take a friend along, to sit with you for half an hour of minor bliss..."

Do some of 'those' Indians seek 'minor bliss' when they defecate in open by choice?

As a kid, I have done it a few times. And I feel, there is some merit in 'minor bliss' theory!
Posted by Aniruddha G. Kulkarni at 9:00 AM No comments: Links to this post