Charles Dickens is Still Laughing with a Touch of Anger but no Triumph, no Malignity

David Hume (‘Of Liberty and Necessity’ in the first Enquiry):

It is universally acknowledged that there is a great uniformity among the actions of men, in all nations and ages, and that human nature remains still the same in its principles and operations. The same motives always produce the same actions: The same events follow from the same causes. Ambition, avarice, self-love, vanity, friendship, generosity, public spirit: these passions, mixed in various degrees, and distributed through society, have been, from the beginning of the world, and still are, the source of all the actions and enterprises, which have ever been observed among mankind. Would you know the sentiments, inclinations, and course of life of the Greeks and Romans? Study well the temper and actions of the French and English: You cannot be much mistaken in transferring to the former most of the observations which you have made with regard to the latter. Mankind are so much the same, in all times and places, that history informs us of nothing new or strange in this particular.

George Orwell has said: "Ultimately there is no test of literary merit except survival, which is itself an index to majority opinion."

('Lear, Tolstoy and the Fool')

And I saw an example of it- longevity rooted in literary merit- yesterday Feb 6 2012 on a Marathi TV news channel.

The claim also appeared in print.

The late N S Phadke (ना सी फडके) imagines that the 'time-man' (कालपुरुष) ferries all books in a boat with a limited carrying capacity. As time goes by and new books keep loading, the time-man is forced to discard books of lesser quality.

‘Shyamchi Aai’ remains firmly on board.

My mother bought me the book at Sangli (सांगली) probably in 1972. I must have read it dozens of times. When I saw P K Atre's (प्रल्हाद केशव अत्रे) movie of the same name later at Deval (देवल) talkies in Miraj (मिरज), I cried almost whole time during the movie. (It's so easy to cry in darkness! And that's the problem with watching movies on TV. No darkness, indeed privacy!)

We are witnessing another glorious example of survival based on literary merit as we celebrate 200th birth anniversary of Charles Dickens on Feb 7 2012.

George Orwell assures: Dickens is one of those writers who are well worth stealing.

But to do that, one has to first read him! And unlike Sane-guruji I have hardly read him.

"The best description of the divorce of work and family, and of its effect on both, is probably Charles Dickens's 1854 novel Hard Times."

What endorsement! I bought 'Hard Times' but haven't still read it.

My son has read Dickens a lot more than me.

My favourite quote of Dickens remains the one that I remember every Diwali:

"………….a good time: a kind, forgiving, charitable, pleasant time: the only time I know of in the long calendar of the year, when men and women seem by one consent to open their shut-up hearts freely, and to think of other people below them as if they really were fellow-passengers to the grave, and not another race of creatures bound on other journeys..." ('A Christmas Carol')

However, I have read a lot about him.

"Well, there is no such thing as success. The priest can't hope to become a saint- or else it's an illusory dream which vanishes with time; the writer can't hope to write a book equal those of Tolstoy, Dickens or Balzac. He might have dared to believe in the possibility at the outset, but his books always carry a flaw somewhere."

('The Other Man: Conversations with Graham Greene', Marie-Francoise Allain,1981)

'book equal those of Dickens'

But the best essay on Dickens for me is Orwell's:

"...In Oliver Twist, Hard Times, Bleak House, Little Dorrit, Dickens attacked English institutions with a ferocity that has never since been approached. Yet he managed to do it without making himself hated, and, more than this, the very people he attacked have swallowed him so completely that he has become a national institution himself...

...Many children begin to know his characters by sight before they can even read, for on the whole Dickens was lucky in his illustrators. A thing that is absorbed as early as that does not come up against any critical judgement...

...The truth is that Dickens's criticism of society is almost exclusively moral. Hence the utter lack of any constructive suggestion anywhere in his work. He attacks the law, parliamentary government, the educational system and so forth, without ever clearly suggesting what he would put in their places. Of course it is not necessarily the business of a novelist, or a satirist, to make constructive suggestions, but the point is that Dickens's attitude is at bottom not even destructive. There is no clear sign that he wants the existing order to be overthrown, or that he believes it would make very much difference if it were overthrown. For in reality his target is not so much society as ‘human nature’. It would be difficult to point anywhere in his books to a passage suggesting that the economic system is wrong as a system. Nowhere, for instance, does he make any attack on private enterprise or private property...

...His whole ‘message’ is one that at first glance looks like an enormous platitude: If men would behave decently the world would be decent...

...And of course this narrowness of vision is in one way a great advantage to him, because it is fatal for a caricaturist to see too much. From Dickens's point of view ‘good’ society is simply a collection of village idiots. What a crew!...

...One very striking thing about Dickens, especially considering the time he lived in, is his lack of vulgar nationalism...In the whole of A Tale of Two Cities there is not a line that could be taken as meaning, ‘Look how these wicked Frenchmen behave!’...

...When one reads any strongly individual piece of writing, one has the impression of seeing a face somewhere behind the page. It is not necessarily the actual face of the writer. I feel this very strongly with Swift, with Defoe, with Fielding, Stendhal, Thackeray, Flaubert, though in several cases I do not know what these people looked like and do not want to know. What one sees is the face that the writer ought to have. Well, in the case of Dickens I see a face that is not quite the face of Dickens's photographs, though it resembles it. It is the face of a man of about forty, with a small beard and a high colour. He is laughing, with a touch of anger in his laughter, but no triumph, no malignity. It is the face of a man who is always fighting against something, but who fights in the open and is not frightened, the face of a man who is generously angry — in other words, of a nineteenth-century liberal, a free intelligence, a type hated with equal hatred by all the smelly little orthodoxies which are now contending for our souls." 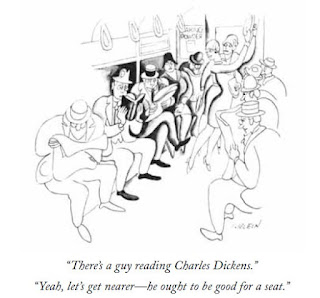 Two standing women talking to each other-

"Yeah, let's get nearer- he ought to be good for a seat." 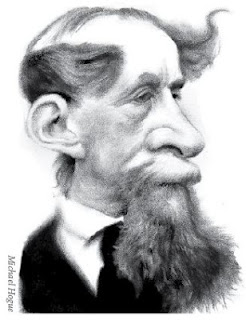 He is still laughing...

Google Doodle on Feb 7 2012 Courtesy: Google Inc.
Posted by Aniruddha G. Kulkarni at 9:55 AM No comments: