If Barack Obama is a Muslim, so was J L Nehru!

According to Pew Forum on Religion & Public Life, 18 percent of Americans recently polled believe that President Barack Obama is a Muslim.

I have often wondered how similar, many prosperous Indian middle-class and right-wing Americans are: Obsessed with Islam and mosque. Babri or WTC. One demolished, one yet to be erected.

Once Kurundkar told his majority Brahmin audience that he was now going to praise Mahatma Gandhi knowing fully well that his audience disliked, if not hated, Gandhi! (Kurundkar was a staunch Gandhian but he was happy that Pakistan was created.)

As I have noted earlier, in Brahmin Marathi middle-class homes, seldom a family gathering perhaps passes without tongue-lashing at either Muslims or North Indians or affirmative-action or all of them.

If a Pew poll were to be taken about J L Nehru among Brahmin Maharashtrians in late 1940's, 18% would surely have said Nehru, and even M K Gandhi, were Muslims!

"...It remains to be seen whether today's intellectual legacy will be as impressive. The signs of late have not been encouraging. Witness the recent statement by President Obama's appointee to head NASA, Charles Bolden, who said that his "perhaps foremost" mission is to "engage much more with dominantly Muslim nations to help them feel good about their historic contribution to science, math and engineering."..." (WSJ, July 19 2010)

I wonder why Mr. Reynolds doesn't find this encouraging. Sure, many Muslims already know this. But isn't a bit special for them to hear it from the chief of NASA?

If such a statement were to be made by NASA chief about medieval India's contribution to science and technology, he would become a household name. After all isn't NASA more popular and respected- who can forget hoopla over Indian-American Kalpana Chawla's travel in space shuttle Columbia- here than it is in US?

I think Charles Bolden's statement is one of the most matured statements I have read made by a Westerner in high position in recent times. It will surely help US build bridges to Islamic cultures.

As for achievements of Muslims in science, math and engineering, read S. Frederick Starr.

"...In AD 998, two young men living nearly 200 miles apart, in present-day Uzbekistan and Turkmenistan, entered into a correspondence. With verbal jousting that would not sound out of place in a 21st-century laboratory, they debated 18 questions, several of which resonate strongly even today.

Are there other solar systems out among the stars, they asked, or are we alone in the universe? In Europe, this question was to remain open for another 500 years, but to these two men it seemed clear that we are not alone.

They also asked if the earth had been created whole and complete, or if it had evolved over time.

Time, they agreed, is a continuum with no beginning or end. In other words, they rejected creationism and anticipated evolutionary geology and even Darwinism by nearly a millennium. This was all as heretical to the Muslim faith they professed as it was to medieval Christianity.

Few exchanges in the history of science have so boldly leapt into the future as this one, which occurred a thousand years ago in a region now regarded as a backwater. We know of it because a few copies of it survived in manuscript and were published almost a millennium later. Twenty-six-year-old Abu al-Rayhan al-Biruni, or al-Biruni (973–1048), hailed from near the Aral Sea and went on to distinguish himself in geography, mathematics, trigonometry, comparative religion, astronomy, physics, geology, psychology, mineralogy, and pharmacology. His counterpart, Abu Ali Sina, or Ibn Sina (ca. 980–1037), was from the stately city of Bukhara, the great seat of learning in what is now Uzbekistan. He made his mark in medicine, philosophy, physics, chemistry, astronomy, theology, clinical pharmacology, physiology, ethics, and even music. When eventually Ibn Sina’s great Canon of Medicine was translated into Latin, it triggered the start of modern medicine in the West. Together, the two are regarded as among the greatest scientific minds between antiquity and the Renaissance..."

Was he also a tent maker? 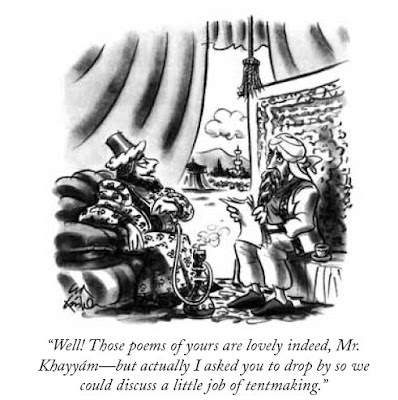 My caption: Your calendar is a miracle Mr. Khayyam- but actually I asked you to drop by so we could discuss my daughter's horoscope. They say Mars there may cast an evil eye on her marital life.

p.s This post was published on August 22 2010. And I came across following cartoon on August 24 2010. We waste reams of paper only to discover a Luckovich! Isn't he a modern master? Look at the eyes of the Indian and American frogs in a well...err pot. They reflect their attitudes. 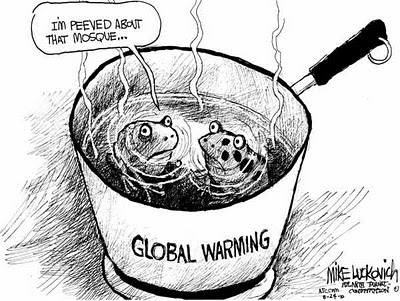 Artist: Mike Luckovich
Posted by Aniruddha G. Kulkarni at 9:00 AM No comments: