“Well, maybe we’ll fly in balloons, the cut of jackets will be different, we’ll have discovered a sixth sense, maybe even developed it - I don’t know. But life will be the same - difficult, full of unknowns, and happy. In a thousand years, just like today, people will sigh and say, oh, how hard it is to be alive. They’ll still be scared of death, and won’t want to die.”

Adam Gopnik, on 'Mad Men' in The New Yorker:"Though pop culture is most often performed by the young, the directors and programmers and gatekeepers—the suits who control and create its conditions, who make the calls and choose the players—are, and always have been, largely forty-somethings, and the four-decade interval brings us to a period just before the forty-something was born. Forty years past is the potently fascinating time just as we arrived, when our parents were youthful and in love, the Edenic period preceding the fallen state recorded in our actual memories."

I saw 'Mad Men' for the first time in May 2012. Season 4 & 5. And as I watched it, I knew instinctively that it was based in 1960's. It was like browsing Life magazine numbers my father had.

Today as I continue to watch the saga, I feel I have seen that lost world in real life too, I seem to remember it...Or so I feel!

That feeling is accentuated because my father used to hold coaching classes for the students of B.A. for a couple of years in the late 1960's. He taught them English. There were more girls than boys in his class and many of those 16-20 year-old girls were pretty. All of them wore sarees. I was no more than 9 year old. To draw their attention, I sometimes hid their sandals! 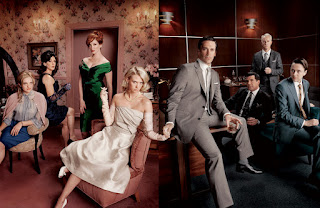 'the cut of jackets are different!'

'Mad Men' is entertaining and disturbing.

I don't think it's about nostalgia.

'Mad Men' is what we are. That is what we have always been. In 2050's, we too will come across the same way as "Mad Men" do today. Not sure about the sixth sense of Chekhov but the cut of jackets will be different.

"...“Something Happened,” by far his most unflinching novel and perhaps his most influential too. (Most present-day depictions of the dread-filled workplace and dead-end family life, from “The Office” to “Mad Men,” have echoes of it somewhere.)..."

However, I think it's almost impossible to recreate 'Something Happened' either on TV or movie screen. We have to make do with 'The Office' and 'Mad Men' 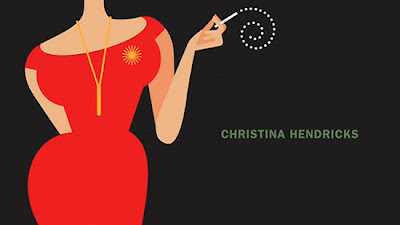 Alas there is no equivalent of 'Mad Men' on Indian TV. There won't likely be any.

When Rajesh Khanna died on July 18 2012 and the late 1960's and early 1970's came pouring out on TV, I thought only 'Mad Men' kind of series could bring back the life when Mr. Khanna was the monarch of Hindi film industry...girls wearing pointy bras kissed his car, married his photographs, wrote love letters in their blood (we then had fountain pens!)...Mad Women?

But we have our ways to revisit the time "when our parents were youthful and in love"...And I am not talking about watching a Shammi Kapoor film from 1960's...

"...where even today a lady looks like my mother of 1970's, where there is no evil, where life is uncomplicated, where people pay attention to their surroundings instead of burying their face in a mobile phone..." 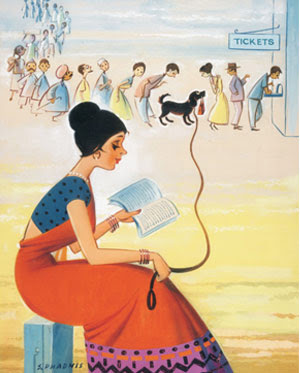 Smart Lady and Her Dog