“No mockery in this world ever sounds to me so hollow as that of being told to cultivate happiness. What does such advice mean? Happiness is not a potato, to be planted in mould and tilled with manure.”

Rajwade has no high opinion of not just Marathi novels but English too. He is fond of French and Russian novels.


Well, today Mr. Rajwade would be surprised to know that Bronte's 'Jane Eyre', 1847 is now commonly accepted in the canon of English literature and is widely studied in secondary schools.

Not just that,  "Charlotte Brontë has been called the 'first historian of the private consciousness' and the literary ancestor of writers like Joyce and Proust. The novel contains elements of social criticism, with a strong sense of morality at its core, but is nonetheless a novel many consider ahead of its time given the individualistic character of Jane and the novel's exploration of classism, sexuality, religion, and proto-feminism." (Wikipedia)

(BTW: it's surprising that Rajwade does NOT mention Herman Melville’s ‘Moby-Dick’, 1851, probably the greatest American novel of all time)

India figures in ‘Jane Eyre’ as it does in most 19th century English literature.


In later part of the novel, St. John asks Jane to come with him to India. He wants her to come as his wife while she wants to be his sister!
“....“I am ready to go to India, if I may go free.”
“Your answer requires a commentary,” he said; “it is not clear.”
“You have hitherto been my adopted brother—I, your adopted sister: let us continue as such: you and I had better not marry.”
He shook his head. “Adopted fraternity will not do in this case. If you were my real sister it would be different: I should take you, and seek no wife. But as it is, either our union must be consecrated and sealed by marriage, or it cannot exist: practical obstacles oppose themselves to any other plan. Do you not see it, Jane? Consider a moment—your strong sense will guide you.”
I did consider; and still my sense, such as it was, directed me only to the fact that we did not love each other as man and wife should: and therefore it inferred we ought not to marry. I said so. “St. John,” I returned, “I regard you as a brother—you, me as a sister: so let us continue.”
“We cannot—we cannot,” he answered, with short, sharp determination: “it would not do. You have said you will go with me to India: remember—you have said that.”
“Conditionally.”...”

I thought this was funny.  There was so much of this brother-or-husband / sister-or-wife confusion in 20th century India, particularly before independence.

I remember letters that were exchanged between Kavi Anil (कवी अनिल) and Kusumavati Jaywant. They started their exchange by addressing each other as brother (दादा) and sister (ताई) and went on to marry each other!

There are dozens of such examples.

This 'Victorian' custom must have come to English-educated Maharashtra from England via Bengal. In any case, they were reading Bronte at Fergusson college when Anil and Kusumavati attended it 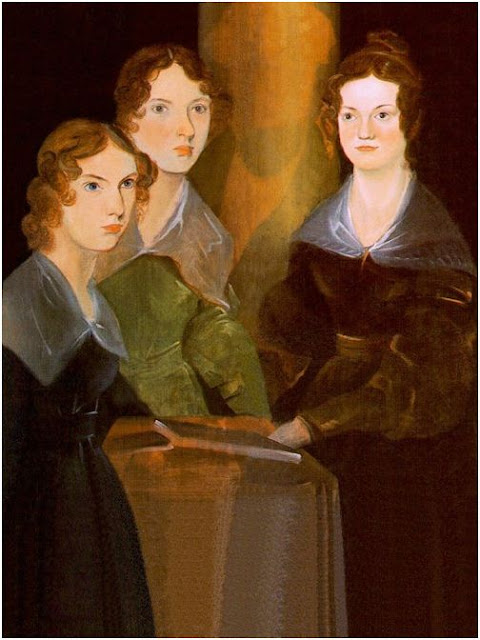 
“Branwell—Emily—Anne are gone like dreams—gone as Maria and Elizabeth went twenty years ago. One by one I have watched them fall asleep on my arm—and closed their glazed eyes—I have seen them buried one by one—and—thus far—God has upheld me.” 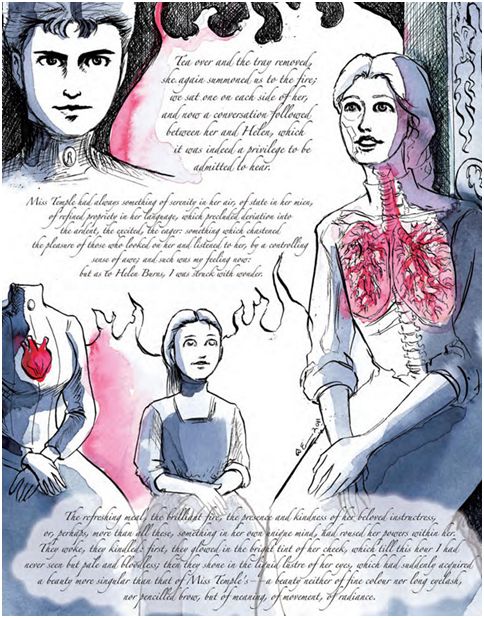 (if you have a difficulty reading speech balloons in the picture above, I have reproduced them below)


“Tea over and the tray removed, she again summoned us to the fire; we sat one on each side of her, and now a conversation followed between her and Helen, which it was indeed a privilege to be admitted to hear.

Miss Temple had always something of serenity in her air, of state in her mien, of refined propriety in her language, which precluded deviation into the ardent, the excited, the eager: something which chastened the pleasure of those who looked on her and listened to her, by a controlling sense of awe; and such was my feeling now: but as to Helen Burns, I was struck with wonder.

The refreshing meal, the brilliant fire, the presence and kindness of her beloved instructress, or, perhaps, more than all these, something in her own unique mind, had roused her powers within her. They woke, they kindled: first, they glowed in the bright tint of her cheek, which till this hour I had never seen but pale and bloodless; then they shone in the liquid lustre of her eyes, which had suddenly acquired a beauty more singular than that of Miss Temple’s—a beauty neither of fine colour nor long eyelash, nor pencilled brow, but of meaning, of movement, of radiance.” (Chapter VIII, 'Jane Eyre', 1847)
Posted by Aniruddha G. Kulkarni at 9:05 AM No comments: Links to this post