To hunt in the morning, fish in the afternoon, rear cattle in the evening, criticise after dinner

It taught me a lot of things.

For example, how alienation is not necessarily bad for mankind. How? If not for alienation, Tukaram might not have written his Gatha. (The greatest book in Marathi and one of the best in the world).

I read in it Marxism’s ultimate goal: “In communist society, where nobody has one exclusive sphere of activity...society regulates the general production and thus makes it possible for me to do one thing today and another tomorrow, to hunt in the morning, fish in the afternoon, rear cattle in the evening, criticise after dinner, just as I have in mind, without ever becoming hunter, herdsman or critic.” This was very charming. I have never ever got over this.

Although I still did not know what Marxism was, I became more Marxist after reading all this!

The Economist (Christmas Special Double issue of 2002) has a good essay on Marx. It says Marxism as a system of government is dead or dying but as a system of ideas, its future looks secure. Lord Meghnad Desai, author of “Marx's Revenge”, argues that Marx was misunderstood and that the great man was right about far more than he is given credit for.

When Lisa Simpson tells her father ( [3F03] 'Lisa the Vegetarian' Original airdate: 15-Oct-95): " While I was gone I got some really good advice from Paul and Linda McCartney." Her father Homer Simpson says: "Rock stars. Is there anything they don't know?".

Similarly Gandhi and Marx have commented on just about everything under the sun. Much more than even prophets.

I wonder if there is any comment from Marx on this specific “tired, rundown feeling”. Also, will these guys ever get a chance to hunt or fish? 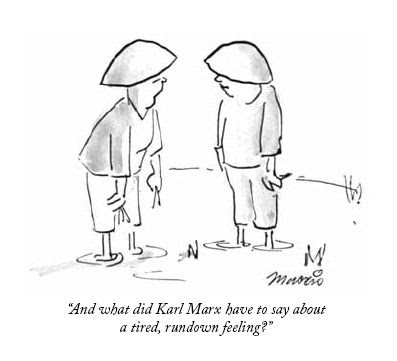 Posted by Aniruddha G. Kulkarni at 10:42 AM No comments: Links to this post