The year 2015 is the centenary year of Franz Kafka's "Die Verwandlung" ("The Metamorphosis"). It was first published in October 1915.


"As Gregor Samsa woke one morning from uneasy dreams, he found himself transformed into some kind of monstrous vermin.…"

I have paraphrased David Cronenberg to construct the above.

"He wakes up to find that he’s become a near-human-sized beetle (probably of the scarab family, if his household’s charwoman is to be believed), and not a particularly robust specimen at that. Our reactions, mine and Gregor’s, are very similar. We are confused and bemused, and think that it’s a momentary delusion that will soon dissipate, leaving our lives to continue as they were. What could the source of these twin transformations possibly be? Certainly, you can see a birthday coming from many miles away, and it should not be a shock or a surprise when it happens. And as any well-meaning friend will tell you, seventy is just a number. What impact can that number really have on an actual, unique physical human life?..." 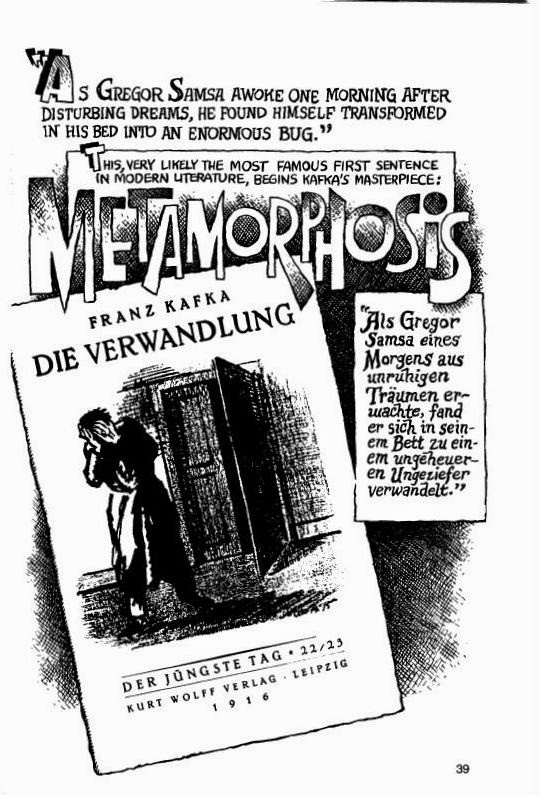 
David Cronenberg-  whose film 'The Fly', 1986 has similarities with Kafka's book- concludes his essay with this:

"...When I went on my publicity tour for The Fly, I was often asked what insect I would want to be if I underwent an entomological transformation. My answers varied, depending on my mood, though I had a fondness for the dragonfly, not only for its spectacular flying but also for the novelty of its ferocious underwater nymphal stage with its deadly extendable underslung jaw; I also thought that mating in the air might be pleasant. Would that be your soul, then, this dragonfly, flying heavenward? came one response. Is that not really what you’re looking for? No, not really, I said. I’d just be a simple dragonfly, and then, if I managed to avoid being eaten by a bird or a frog, I would mate, and as summer ended, I would die.)"

mating in the air might be pleasant....sure...and so will be the death at the end of the summer...
Posted by Aniruddha G. Kulkarni at 9:00 AM No comments: