Bhagat Singh Lives In Many Hearts, Lenin Just A Collectible

Supreme sacrifice of young Bhagat Singh, Rajguru and Sukhdev for a larger cause has motivated millions in the past and will continue to do so.

T S Shejwalkar (त्र्यंबक शंकर शेजवलकर) has described in his essay of October 1930 what Motilal Nehru (more charismatic personality than his son) felt on meeting Bhagat Singh:”For the first time in my life, I met someone greater than me.”

Bhagat Singh was just 23 when hanged.

I have always been impressed with not just Bhagat Singh’s rugged good looks- wearing Western hat or prisoner’s chains- but his intellect. Man was an atheist and remained so till the end. He didn’t believe in rebirth. He must be one of the first famous people in India to talk about Charles Darwin’s work. Just for the appreciation of readers, he established a library of 175 books at Agra, where the Assembly bomb plan was finalised. As a revolutionary thinker, he encouraged the reading habit among his comrades and also debates on topical social and political issues.

His family was very eclectic and was open to diverse influences. It truly believed in a composite India and also practised it in the family.

He once said: “Up to that period (1925) I was a romantic revolutionary… That was a turning point in my revolutionary career;

“Study” was the cry that reverberated in the corridors of my mind. Study to enable yourself to face the arguments advanced by opposition. Study to arm yourself with arguments in favour of your cult. I began to study.

My previous faith and convictions underwent a remarkable modification. The romance of violent methods alone, which was so prominent amongst our predecessors, was replaced by serious ideas. No more mysticism, no more blind faith. Realism became our cult. Use of force justifiable when restored to as a matter of terrible necessity: non-violence as policy indispensable for all mass movements. So much about methods.

The most important thing was the clear conception of ideal for which we were to fight. As there were no important activities in the field of action, I got ample opportunity to study various ideals of world revolution. I studied Bakunin, the anarchist leader, something of Marx, the father of communism and much of Lenin, Trotsky and others – the men who had successfully carried out a revolution in their country.”

Bhagat Singh trusted Lenin and his revolution in Russia without realizing horrors of Russian revolution. George Orwell was to write “Animal Farm” only in 1945.

Brad DeLong:”Lenin was a really evil man. His followers and supporters slaughtered more than ten million of their fellow humans… for Communists, Lenin and Guevara are truly heroic. Standing as they did on the shoulders of the great Karl Marx, they saw deeply into the present and far into the future. They ran great personal risks and stood bravely against their adversaries as they struggled to bring about the revolutionary liberation of humanity.... we cannot view Lenin and Guevara as truly heroic, any more than we can view Hitler and Mussolini as truly heroic…”

In retrospect, I feel Bhagat Singh didn’t need Lenin. His native idealism, his ideas, his leadership qualities and his youthful good looks were more than enough to power his dreams.

Like in the picture below Lenin is being assigned to the dustbin of history while Bhagat Singh continues to rule many young hearts in India. 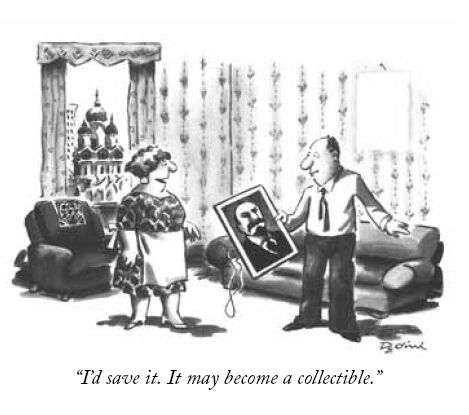