To begin with,personal disclaimer:
Potato not just sustains lives of my son and I but gives us ultimate gastronomic pleasure. My wife though could get by without it.

Imagine how more powerful metaphors and imagery Dnyaneshwar would have created if he knew potato, chilli and T-rex!

AFP story says: “Few vegetables can claim to have shaped nations, sent the economy of a country tumbling, or played a starring role in diplomatic spats. But the humble potato can….

The impact of the humble tuber stretches back centuries. The population of Ireland was cut in half in the mid 1800s after the potato crop failed and a four-year famine ensued. The then agriculture-based Irish economy crumbled and the population plummeted from eight million to four million, through deaths from hunger and emigration.
It only surpassed the four million mark in the 1990s, when Ireland entered an economic boom.The massive wave of emigration from Ireland, sparked by the potato famine, shaped politics and history not only locally but also in the United States, the destination for the vast majority of those who left…”

In 1997, Tony Blair, British Prime Minister, apologized to Ireland for the famine which caused 1 million deaths. Many Irish people believe that Britain, which controlled the land, was more than negligent -- that it in fact worsened the problem by allowing the profitable export of grain and cattle from Ireland even as the poor starved.

(Btw- I wonder if Britain ever apologized to India for the Bengal famine of 1943 that occurred in British administered Bengal. It is estimated that 1.5-3 million people died from starvation and malnutrition during the period.)

And finally, what does potato on the plate have to do with the one on couch?

“British potato farmers have marched on the houses of parliament in London to demand that the term "couch potato" be removed from the dictionary. They argued the expression - which is derived from the slang word for a television, "tube", which gave rise to "tubers" for those who spent hours hunkered down on the sofa gazing at it - gave the impression that potatoes are bad for the health and, therefore, bad for their business.” 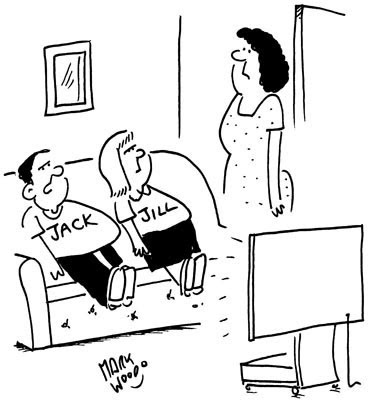 ‘You want us to go up the hill to fetch a pail of water? Not now we’re watching TV.’

The Spectator September 8, 2007
Posted by Aniruddha G. Kulkarni at 12:34 PM No comments: Links to this post