Today March 20 2013 is 57th death anniversary of B S Mardhekar (बा सी मर्ढेकर)...sometimes it's hard to imagine someone with his command of Marathi was writing in that language not too many years ago...

Graham Greene:
"Well, there is no such thing as success. The priest can't hope to become a saint- or else it's an illusory dream which vanishes with time; the writer can't hope to write a book equal those of Tolstoy, Dickens or Balzac. He might have dared to believe in the possibility at the outset, but his books always carry a flaw somewhere."

Why do I say that?

("Even if I pass on as a grinning joker,
company of Dante and Shakespeare in proximity
somewhere in my good fortune after my death-!
even this thought is no less consoling")

Remember, in 'Shishiragam' collection,  BSM is NOT the poet we now know. There, he comes across as some one following his idol Madhav Julian  (माधव जूलियन) or English romantic poets he studied and later taught.

But then he is already thinking of life after death spent in the neighborhood of Dante and Shakespeare! It's like after playing just one season of Ranji trophy cricket with some success, you seek the company of Don  Bradman and Garry Sobers in your afterlife!

If you do that you are either a pompous fool or you must be really good and confident about your creative future. For me, Mardhekar was the latter.

What might have happened when rather young BSM met his maker? 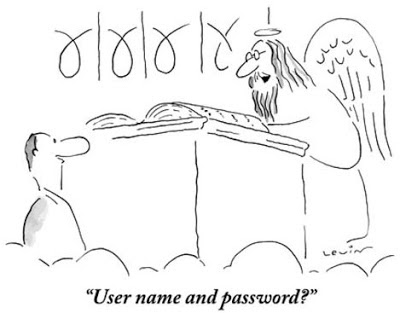 courtesy: the artist, the magazine and  Bob Mankoff's blog

(Now, user name and password are confidential. No one is supposed to ask them to you, especially  very openly. But then where's the problem if it's perhaps the last time you will ever need them?)

Mardhekar was perhaps ushered in without this formality and shown his dwelling next to Dante and Shakespeare! I hope so.

("I came to rest momentarily;
touched down feet:
At once you confronted with "who"
and the tired aspirations in the mind
turned to shit")

Is "who" in the poem above refers to "Username and password?"
Posted by Aniruddha G. Kulkarni at 9:00 AM No comments: Links to this post