Diwali is almost upon us. I already smell it. Narak Chaturdashi नरक चतुर्दशी, first day of the festival, is celebrated in Maharashtra with an early morning bath अभ्यंग स्नान.

At Miraj, mother always woke us when it was still dark and cold. It felt colder because our house had a tiled roof, I was less fat and there was no constant talk of global warming.

I liked that day the best. I still like it because I like getting up early. They say this liking is written in one’s DNA, a gene called Period 3. Yes, I agree because my mother too liked it.

In that respect, I am not like a cockroach.

Business Line on September 30, 2007 reported that:

“It's not just people who find it hard to get going in the morning. Cockroaches don't like mornings either, according to US researchers.

A study by biologists at Vanderbilt University in Nashville, Tennessee, found dramatic variations in a cockroach's learning ability throughout the day. In the morning, the insects couldn't learn a new task, but in the evening, something kicked in…

This study was a surprise from the beginning to the end—the fact that cockroaches could be trained, even though you would not generally say they are a high IQ creature, and the impact that their body clocks had on their ability to learn…”

Roaches are in excellent company of Calvin, my son and my wife!

(click on the picture to get a larger view)
Posted by Aniruddha G. Kulkarni at 4:49 PM No comments:

Shivaji Would Have Ordered Hacking For Injustice to Lakshmana Kailash, Victim of Tyrannies

Times of India on November 3, 2007 reported a sad story of an innocent young man.

“In the early hours of August 31, Lakshmana Kailash K was asleep at his home in Bangalore. He was woken up by eight policemen from Pune who came knocking on his door and waved the Information Technology Act, 2000, in his sleepy, terrified face. Get dressed, he was told, we are taking you to Pune for having defamed Shivaji. Lakshmana protested that he didn't know anyone called Shivaji.

The policemen said that they were talking about Chhatrapati Shivaji and that an insulting picture of him had been uploaded on the Internet networking site, Orkut. The trail had led them to his computer in Bangalore. Turning a deaf ear to his protests, the cops took him to Pune and put him behind bars. Along the way, the 26-year-old Lakshmana, who works with HCL, learned that what he was being arrested for was a case that had triggered riots in Pune in November 2006. Political parties had forcibly closed cybercafes and gone on a rampage over the posting of the illustration which had poked fun at Shivaji.

Lakshmana was released after spending 50 days in jail, three weeks after the cops claimed to have nabbed the "real culprits".
“
This reminded me of the infamous case of P Rajan, an engineering college student during Indira Gandhi’s emergency.

Why does the state do this in the name of Shivaji- one of the most tolerant, sensitive and fair rulers India produced? (Akbar, Ashoka & Krishnadev Raya are luckier. No one still does this in their names!)

In 17th century, Shivaji- enraged at this gross injustice to a common man- would have ordered hacking of arms of erring staff of the ISP who apparently gave wrong IP address to the police.

Meanwhile, Lakshmana Kailash’s only consolation can be…. 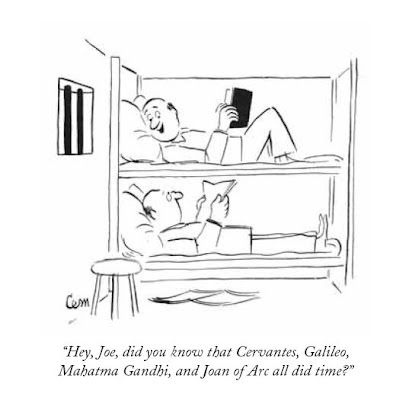