Our Globe- Not Guaranteed Against American Sacred Cows and their Pee

JRO knew Sanskrit well and is shown quoting from Bhagavad-Gita- "Now, I am become Death, the destroyer of worlds." -when he sees the first nuclear explosion "Trinity". Oh how I wish he read Buddha and Bhakti literature after Gita and never joined Manhattan Project!

Don Quixote says: “And had the luck, with much ado, To live a fool, and yet die wise.” but how about we making some attempt to live wise!

American empire’s desire to reshape the world manifests itself in many ways. Atom Bomb, like current Iraq war, was just one of them. Neither the first, nor the last.

American President Harry Truman attended the conference. He flew in there on his plane "The Sacred Cow".

He since then has written few more essays-most of them have appeared in Lalit Diwali numbers- analysing few more poems of Mardhekar.

Dhond called me some time in 2003 and asked me if I knew this poem. I did. How did I find it? I liked it, particularly the last two lines. Did I understand it? I had no clue! Then I requested him to include every poem of Mardhekar in the next edition of his book because I now didn't seem to understand even those poems that I thought I had understood earlier!

He explained to me what Mardhekar probably meant. Mardhekar is making fun of America’s President astride “Sacred Cow” and their latest instrument - San Francisco Conference- to reshape (manipulate?) the world.

I congratulated Dhond on his impeccable timing because US had invaded Iraq that year, again by brazenly manipulating UN. We all now know how brazen and with what consequences!

I did some googling and sent Dhond some info relevant to the subject. Showing large and kind heart, he has mentioned me in the essay. Please see his letter to me on the subject at the end of this post. Feel his humility. 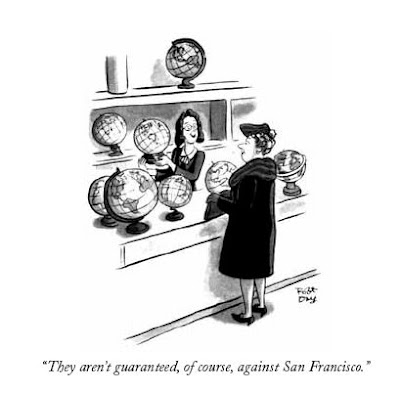 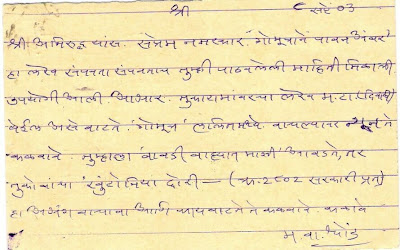