There is a cliché about Mumbai locals. “They’re Mumbai’s life-line”. May be. But more than that I think they define Mumbai more than any thing else. Yes, more than Hindi film industry.

When I first visited Mumbai in 1980 at the age of 20, Mumbai looked and sounded different than any other place. It was because of local trains. Later from 1981 to 1983, I lived in Chennai, which too had locals. But unlike Mumbai, locals did not define Chennai’s personality.

Later I had the opportunity to live in Mumbai from 1983 to 1987. I even commuted for a while on its trains. I was lucky though because I used to commute ‘against the flow’. When people traveled towards the downtown, I traveled away from it and vice versa.

The experience was like getting to know another world. The world that has its own etiquettes and rules.

You cannot wear a raincoat there (no-brainer as you will wet your neighbour). If you want to get down at a particular station, you need to start moving towards exit just in time (not too early, not too late). A seat is meant for three people but if you try you can accommodate the fourth person rather easily. You can trust a total stranger to save you if you are about fall off the carriage. You can be sure a total stranger will help you to get on to the fast moving train if you are trying to catch it. No stranger will talk to you about anything unless you talk to him first.

It’s a world within a world. You are in a trance while in it.

VERLYN KLINKENBORG has written a beautiful essay “The Subway Beat” (NYT June 25, 2007).
“It’s nearly always a mistake to think of the subway as a public conveyance. This is a mistake that out-of-towners often make. They overlook the essential privacy of the subway, and by that I don’t mean the young woman at my end of the car who has made up her face in a compact mirror between 86th Street and Times Square. I mean the very fact that this is my end of the car at my end of the train. It’s 7:30 in the morning, and this isn’t just a subway ride. This is going to work. Nearly all the people on this train are in their usual spots, within a few minutes of their usual time, and the ride is not separable from the larger and more complicated rhythms of our private lives. It is possible to be on this train and not yet be in public.
“Please watch the closing doors,” comes the announcement. The doors close. Everyone here knows just how long the delay should last before the train begins to slide forward. We could count it off: the doors close, then comes a single beat, and then we feel that horizontal gravity as the train picks up speed. But on this one train the one beat passes, then another and another before we finally start to slide out of the station. It happens at every stop. Three beats, four beats too many. Perhaps the driver adds these extra beats to allow riders to find a seat. I like to think it’s a tiny, intentional perversity.
This has happened many times before. After the one beat, the whole train leans forward mentally. We are urging ourselves on our way. If the train ran by some kind of synchronous psychological impulsion, we would be moving by now.
We know how to be stoic when stuck between stations. But there is something heartbreaking in this added pause. It interrupts the privacy of our thoughts and shows us what the other passengers are thinking. It holds us back from flinging ourselves headlong into the morning. It shows us, if just for an instant, how deeply we have internalized the pulses of this city. “

Mumbai locals have made impression on Indian art world.

One example- Raj Kapoor’s classic “Boot Polish”. The Movie could not have been made without locals

Vasant Sarwate वसंत सरवटे and Abhimanyu Kulkarni have drawn some touching cartoons on the subject of “local life”.

Here is one by Vasant Sarwate that shows a man reading “Robinson Crusoe” on a crowded train and the caption reads: “does literature contain reflection of the whole society is a real question” (please note the man is not holding on to anything to maintain his balance! I can vouch he need not) 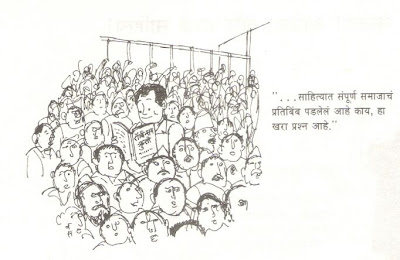