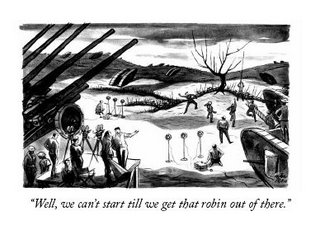 This picture is perhaps most incisive anti-war commentary I saw in such a small space. Although scene is of a film shooting, its panoramic setting gives an impression of an impending battle.

And then you see a small battle that is already pitched!. A robin has held up the shooting and film crew is throwing stones and using other means to shoo it away. Once robin flies away, guns will boom and shooting will start.

Peace is so fragile.

It indeed was in 1930. Mankind's worst war was going to rage in less than a decade.
Posted by Aniruddha G. Kulkarni at 12:22 PM 1 comment: